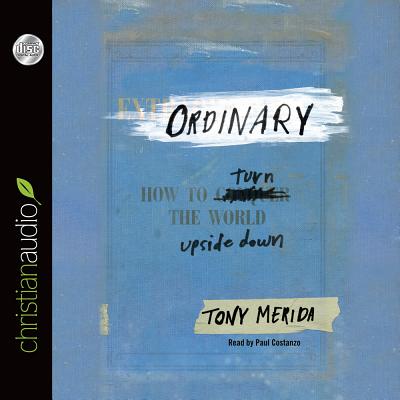 How to Turn the World Upside Down

What if the path toward an extraordinary life is becoming more ordinary?

Ordinary is not a call to be more radical. If anything, it is a call to the contrary. The kingdom of God isn't coming with light shows, and shock and awe, but with lowly acts of service. Tony Merida wants to push back against sensationalism and "rock star Christianity," and help people understand that they can make a powerful impact by practicing ordinary Christianity.

Through things such as humble acts of service, neighbor love, and hospitality, Christians can shake the foundations of the culture. In order to see things happen that have never happened before, Christians must to do what Christians have always done-. Christians need to become more ordinary.

Let's think together about how we, ordinary people, doing ordinary things, might turn the world upside down.

Tony Merida is the founding pastor of Imago Dei Church in Raleigh, NC. Tony is the author of Faithful Preaching, co-author of Orphanology, and serves as a general editor and as contributor to the Christ-Centered Exposition Commentary series (B&H Publishing Group) along with David Platt and Danny Akin. He is married to Kimberly, with whom he has five adopted children.
Loading...
or
Not Currently Available for Direct Purchase