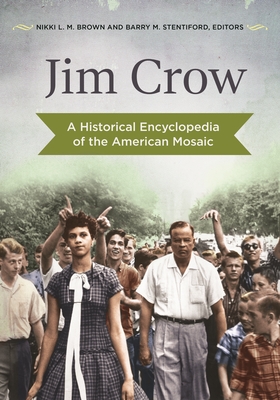 A Historical Encyclopedia of the American Mosaic

Many Americans imagine that African Americans' struggle to achieve equal rights has advanced in a linear fashion from the end of slavery until the present. In reality, for more than six decades, African Americans had their civil rights and basic human rights systematically denied in much of the nation. Jim Crow: A Historical Encyclopedia of the American Mosaic sheds new light on how the systematic denigration of African Americans after slavery--known collectively as Jim Crow--was established, maintained, and eventually dismantled.

Written in a manner appropriate for high school and junior high students as well as undergraduate readers, this book examines the period of Jim Crow after slavery that is often overlooked in American history curricula. An introductory essay frames the work and explains the significance and scope of this regrettable period in American history. Written by experts in their fields, the accessible entries will enable readers to understand the long hard road before the inception of the Civil Rights Movement in the 20th century while also gaining a better understanding of the experiences of minorities in the United States--African Americans, in particular.