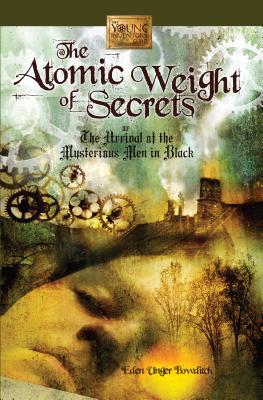 ―P.B. KERR, AUTHOR OF THE CHILDREN OF THE LAMP SERIES AND OTHER YOUNG ADULT BESTSELLERS

“I simply loved ‘The Atomic Weight of Secrets.” As you can imagine, I’ve read more than a few young adult books. ‘The Atomic Weight’ was every bit as wonderful and riveting as any of them. I couldn't put it down! I was reading late into the night, eyes heavy with sleepiness, but I still couldn't stop. Bravo! I cannot wait for the next one!

"While studio executives and movie producers squabble over the screen rights, parents and children will be fighting over the reading rights to Eden Unger Bowditch's marvelous new novel. To ensure a peaceful household, purchase several copies. The Atomic Weight of Secrets gives us a world as rich and strange as childhood itself. So inventive and so compelling, with something very sad and tender and allegorical at its core, this adorable novel is an absolute charmer. It made me laugh, too, many times, and embarrassingly hard. Hilarious! More! More!"

―DANIEL VILMURE, AUTHOR OF THE CRITICALLY ACCLAIMED NOVELS LIFE IN THE LAND OF THE LIVING AND TOBY'S LIE

“I love this book and if a movie is made of it, it will be awesome, too. I love it because it seems so real. It's the perfect book for a summer holiday. I'm sure everyone who buys this book will laugh and enjoy it as much as I did. If I was rating this book, I'd give it the highest rank you could.”

“The novel is written in a slightly old-fashioned style that suits its setting (the beginning of the twentieth century), and there were passages where the writing truly soared . . . Intricately plotted and well-written, Atomic Weight starts a bit slowly but truly hits its stride in the last third, when all the stories come together into a whole and the children work as one force to outwit those forces opposing them. The threads left untied at the end are of the ‘ooh, I wonder what happens next’ variety (so different from the ‘argh, what just happened’ kind of ending). It’s an ambitious and complex story. The design is very appealing as well (I particularly loved the gears-and-compasses font used in the chapter headings) and the book is as satisfying to look at as it is to read. The Atomic Weight of Secrets is very likely to appeal to those who loved The Mysterious Benedict Society, and I for one am looking forward to the next installment. A really neat book that was jolly good.”