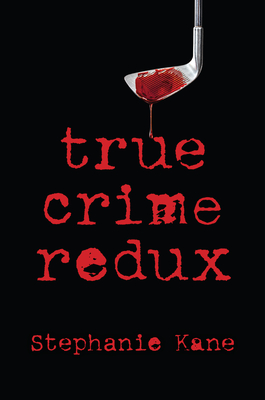 "More than a witness but less than an active participant, I was a bit actor whose role in the crime shaped my life." So writes Stephanie Kane, who here recounts the dramatic events that forever fractured the lives of the Frye family as well as her own.

The murder of Betty Frye goes unpunished for decades. Kane, ex-wife of Betty's son Doug, finally decides to tell her story by fictionalizing the events she witnessed as well as those about which she simply speculated. The result is the novel Quiet Time. She shortly finds out, however, that fiction can oftentimes accurately mirror reality...

In her new true-crime non-fiction, True Crime Redux, Kane artfully describes the chain of events that followed the publication of her novel and brings a forgotten cold case back to life. She dives deep into the inner-workings of modern crime and punishment through the retelling of events she played an involuntary role in.

This strikingly transparent report of a brutal homicide engulfs readers from the very first line. True Crime Redux is thus a perfect pick for true-crime readers looking for a compelling, true story that leaves no stones unturned.

What's Unique About This Book

* Style: Can't-put-it-down story of trauma and forensics delivered in propulsive bursts, with a knock-out blow of an ending.

* Voice: Author holds nothing back about her role in Betty's murder and how it shaped (one might say warped) her life. In promoting its predecessor on podcasts, her transparency and brutal candor were the number one thing that impressed podcasters.

* Saga of an American family plagued by mental illness and struggling to adjust to the demands of a rapidly changing world, and what happens when an outsider enters the scene.

* Personal tale of obsession: Effect of a murder on a normal college girl who felt responsible for it, and the lengths to which she (as an amateur sleuth) went to get answers. A story about finding meaning in the darkness of her past and a reason to move on with her life.

* A raw look at the criminal justice system from the vantage point of a lawyer with the shoe suddenly on the other foot, thrust into the quicksand of being a witness in a cold case investigation and prosecution.

* Art imitating life imitating art: How a true crime inspired a fictional novel which in turn catalyzed the opening of a real-life prosecution of a stone-cold killer.

* Award-winning author (Bantam, Scribner, Pocket) with an outside publicist who's published many magazine pieces, and appeared on podcasts, TV shows, etc. to promote her books.

Stephanie Kane is a lawyer and award-winning author of four crime novels. Born in Brooklyn, she came to Colorado as a freshman at CU. She owned and ran a karate studio in Boulder and is a second-degree black belt. After graduating from law school, she was a corporate partner at a top Denver law firm before becoming a criminal defense attorney. She has lectured on money laundering and white-collar crime in Eastern Europe, and given workshops throughout the country on writing technique. She lives in Denver with her husband and two black cats. Extreme Indifference and Seeds of Doubt won a Colorado Book Award for Mystery and two Colorado Authors League Awards for Genre Fiction. She belongs to the Mystery Writers of America, Rocky Mountain Fiction Writers, and the Colorado Authors League.
Loading...
or support indie stores by buying on