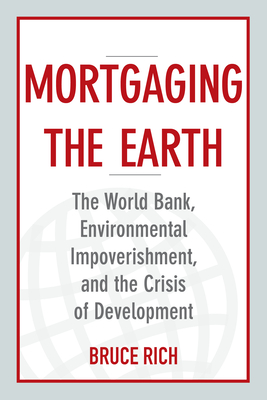 The World Bank, Environmental Impoverishment, and the Crisis of Development

The 1992 Rio Earth Summit was supposed to be a turning point for the World Bank. Environmental concerns would now play a major role in its lending—programs and projects would go beyond economic development to “sustainable development.” More than two decades later, efforts to green the bank seem pallid.

Bruce Rich argues that the Bank’s current institutional problems are extensions of flaws that had been present since its founding. His new book, Foreclosing the Future, tells the story of the Bank from the Rio Earth Summit to today. For readers who want the full history of the Bank’s environmental record, Rich’s acclaimed 1994 critique, Mortgaging the Earth, is an essential companion.

Called a “detailed and thought-provoking look at an important subject” by The New York Times, Mortgaging the Earth analyzes the twenty year period leading up the Rio Summit. Rich offers not only an important history but critical insights about economic development that are ever-more relevant today.


Praise For Mortgaging the Earth: The World Bank, Environmental Impoverishment, and the Crisis of Development…

"This is a detailed and thought-provoking look at an important subject from the viewpoint of a passionate advocate."
— The New York Times Book Review

"One of the most insightful and detailed accounts of the World Bank's planning processes and their negative environmental impacts across the Third World."
— Library Journal

"A detailed catalogue of such misdemeanours"
— The Economist

Bruce Rich is lawyer who has worked for three decades with national environmental organizations. He is an expert on public international finance and the environment. He received the United Nations Global 500 Award for environmental achievement for his research and advocacy concerning multilateral development banks. He is the author of Mortgaging the Earth and To Uphold the World, as well as articles in publications including The Financial Times, The Ecologist, and Environmental Forum, the policy journal of the Environmental Law Institute.