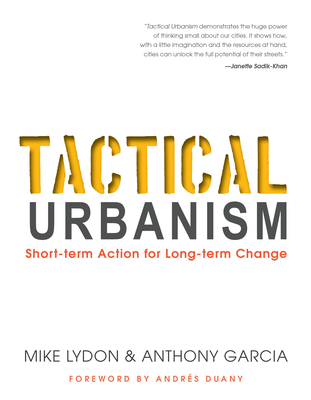 In the twenty-first century, cities worldwide must respond to a growing and diverse population, ever-shifting economic conditions, new technologies, and a changing climate. Short-term, community-based projects—from pop-up parks to open streets initiatives—have become a powerful and adaptable new tool of urban activists, planners, and policy-makers seeking to drive lasting improvements in their cities and beyond. These quick, often low-cost, and creative projects are the essence of the Tactical Urbanism movement. Whether creating vibrant plazas seemingly overnight or re-imagining parking spaces as neighborhood gathering places, they offer a way to gain public and government support for investing in permanent projects, inspiring residents and civic leaders to experience and shape urban spaces in a new way.

Tactical Urbanism, written by Mike Lydon and Anthony Garcia, two founders of the movement, promises to be the foundational guide for urban transformation. The authors begin with an in-depth history of the Tactical Urbanism movement and its place among other social, political, and urban planning trends. A detailed set of case studies, from guerilla wayfinding signs in Raleigh, to pavement transformed into parks in San Francisco, to a street art campaign leading to a new streetcar line in El Paso, demonstrate the breadth and scalability of tactical urbanism interventions. Finally, the book provides a detailed toolkit for conceiving, planning, and carrying out projects, including how to adapt them based on local needs and challenges.

Tactical Urbanism will inspire and empower a new generation of engaged citizens, urban designers, land use planners, architects, and policymakers to become key actors in the transformation of their communities.

"Tactical Urbanism: Short-Term Actions for Long-Term Change is a valuable text for citizens, public-sector planners, and developers alike. The book is easy to read, clear, and is all about action—something you can’t say about many planning-oriented texts."
— Better Cities & Towns

"Tactical Urbanism is a clarion call for citizen action, offering a cornucopia of examples and well-illustrated by photographs of how to effect lasting change through small but incremental steps toward building cities for communities rather than isolated individuals."
— New York Journal of Books

"[An] enthusiastic volume… Tactical Urbanism serves as a how-to guide for activists who want to get in on the action…. [a] practical framework for envisioning and executing tactical urbanism projects… It is, basically, the class you never took in design school."

"The book provides permission for engaged community members to become key actors in the transformation of their neighborhoods."
— Spacing

"Tactical Urbanism serves as a how-to guide for activists who want to get in on the action. There's not a lot of theorizing in Tactical Urbanism, which is probably for the best. Surely future scholars will have a field day with the trends that planners, and citizen-planners, are exploring today. Nowhere are ideas like Henri Lefebvre's 'right to the city' more in question than when citizens take planning into their own hands. For now, though, everyone seems to be rolling up their sleeves and getting out the sidewalk chalk."
— Planetizen

"Our cities need to change, fast. Tactical Urbanism is a guided tour of solutions created when local people decide they can't wait for politics to catch up before they improve their neighborhoods. This weathervane book deserves a place on any urbanist's bookshelf."
— Alex Steffen, author of "Carbon Zero: Imagining Cities That Can Save the Planet"

"This book is a shrewd, generous, timely and sometimes thrilling call-to-action that should be compulsory reading for anyone impatient to remake his or her city."
— Slowottawa

"With Tactical Urbanism, Lydon and Garcia offer expert insight and guidance into how to use this fundamental approach across a broad spectrum of cities and communities to enhance and revitalize city life."
— Congress for the New Urbanism

"Tactical Urbanism goes beyond impatience to offer ideas for a partial alternative."
— Planning

"Tactical Urbanism is a book that will help your community organize into proactive changes."
— Restless Urbanist

"This is a much-anticipated book, and the basic message is an important one: small-scale actions play an essential role in ensuring that cities...are responsive to genuine but unmet needs...This straightforward book succeeds... in conveying the movement’s credibility, especially to audiences attracted by nimble and responsive approaches to urban development."
— Urban Land

"Urban planning is a task that encompasses many layers, but one can never forget that the urban scale has to be connected to the human scale. In Tactical Urbanism, Lydon and Garcia highlight this fundamental relationship, showing through well researched and illustrated examples that simplicity is a key method to positively transform our cities."
— Jaime Lerner, former mayor of Curitiba, Brazil and author of "Urban Acupuncture"

"Tactical urbanism is a brilliant way to jumpstart ambitious change by letting people experience a different future. That is part of what makes this book one of this century’s most valuable guides for urban changemakers."
— Carol Coletta, VP/Community and National Initiatives, The John S. and James L. Knight Foundation

"Cities, city-makers, and citizens would be smart to add the mindset and skills of tactical urbanism to their tool belt. Mike and Anthony’s book, better than any other source, shows how."
— Brent Toderian, city planning and advanced urbanism consultant; former chief planner for Vancouver, British Columbia

"First book to really organize all the small fixes that seem to have spontaneously sprung up in so many communities in a way that everyone can understand....a great overview...Lydon and Garcia do an excellent job of defining what tactical urbanism is and isn’t, and the various forms it takes....thoughtful, informative book."
— ASLA's The Dirt

"Lydon and Garcia have popularized the term tactical urbanism in recent years and work here to define it, explore its history and successes, and proselytize for its continuing application."
— Architectural Record

"[Tactical Urbanism] does a great job of celebrating the many successes of citizen-led action, while acknowledging an integral part of the iterative 'build-measure-learn' cycle of tactical urbanism: having the courage to fail."
— Nature of Cities

Mike Lydon is Principal of The Street Plans Collaborative. An internationally recognized planner, he was a co-author of The Smart Growth Manual and the creator and primary author of the reports “The Open Streets Project” and “Tactical Urbanism: Short-term Action, Long-Term Change” Vol.1 and Vol. 2.  He serves as a Board Member for Center for a New American Dream and CNU New York, and is an advisor for the Bicycle Coalition of Maine. He works and speaks globally on smart growth, livable cities, active transportation, and tactical urbanism.
Anthony Garcia is Principal of The Street Plans Collaborative. A leader in civic advocacy in South Florida, he was Managing Editor and Publisher of TransitMiami.com, an award-winning blog dedicated to planning and transportation in South Florida. He was also Project Director for six years at the firm of Chael Cooper & Associates Architects. He serves as part-time faculty at the University of Miami School of Architecture and is a member of the Congress for the New Urbanism.