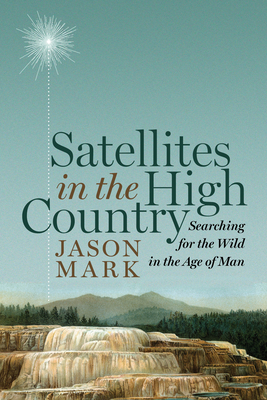 Satellites in the High Country

Searching for the Wild in the Age of Man

In New Mexico's Gila Wilderness, 106 Mexican gray wolves may be some of the most monitored wildlife on the planet. Collared, microchipped, and transported by helicopter, the wolves are protected and confined in an attempt to appease ranchers and conservationists alike. Once a symbol of the wild, these wolves have come to illustrate the demise of wilderness in this Human Age, where man's efforts shape life in even the most remote corners of the earth. And yet, the howl of an unregistered wolf—half of a rogue pair—splits the night. If you know where to look, you'll find that much remains untamed, and even today, wildness can remain a touchstone for our relationship with the rest of nature.

In Satellites in the High Country, journalist and adventurer Jason Mark travels beyond the bright lights and certainties of our cities to seek wildness wherever it survives. In California's Point Reyes National Seashore, a battle over oyster farming and designated wilderness pits former allies against one another, as locals wonder whether wilderness should be untouched, farmed, or something in between. In Washington's Cascade Mountains, a modern-day wild woman and her students learn to tan hides and start fires without matches, attempting to connect with a primal past out of reach for the rest of society. And in Colorado's High Country, dark skies and clear air reveal a breathtaking expanse of stars, flawed only by the arc of a satellite passing—beauty interrupted by the traffic of a million conversations. These expeditions to the edges of civilization's grid show us that, although our notions of pristine nature may be shattering, the mystery of the wild still exists — and in fact, it is more crucial than ever.

But wildness is wily as a coyote: you have to be willing to track it to understand the least thing about it. Satellites in the High Country is an epic journey on the trail of the wild, a poetic and incisive exploration of its meaning and enduring power in our Human Age.

Praise For Satellites in the High Country: Searching for the Wild in the Age of Man…

“In this compellingly readable account of his quest to explore some of the planet’s last remaining stretches of authentic wilderness, environmental writer Mark argues that safeguarding a powerful sense of 'the Wild' as separate from civilization is more critical than ever….Mark presents a fresh, first-rate piece of nature writing and a stirring manifesto calling for the protection and celebration of the true spirit of wild places.”

"Thoughtful meditations from a trustworthy guide that will appeal strongly to anyone interested in wilderness in our post-wild world."
— Kirkus

"One of the pleasures of Satellites in the High Country is that Mr. Mark does not follow the usual nature writer’s path and just throw the word “wild” out there, waving it like a flag, before carrying on with his own happy tramps into the wilderness. His approach to decoding the word is comprehensive, ...The ideas are the best part...trips are well-described and linked clearly to the book’s intellectual lessons."
— Wall Street Journal

"In his new book, Satellites In The High Country: Searching For The Wild In The Age Of Man, Mark takes us on a journey across America in search of wilderness, from a reservation in South Dakota where the reintroduction of bison has divided the community to a cave in Washington state where a British cavewoman is replicating life in the  Paleolithic more than two million years ago. Along the way, he explores the meaning of wilderness and the urgent need to conserve what remains of it."
— National Geographic

"This is true adventure; Mark writes eloquently about our need for nature and our responsibility to preserve it."
— Contra Costa Times

"[This] book... had me reanalyzing...every opinion I hold about what nature is, what wilderness is and what we can, can't, should and shouldn't do to our planet...The book is a conversation. Readers sit down and listen as a friend narrates adventures and ideas, and there's plenty of room to pick up threads of ideas brought up in the book and run with them on your own. Even as you turn the final pages, the book feels like the beginning of a long and very necessary discussion."
— Mother Nature Network

"Mark carves out a fine distinction between inadvertent influence caused by factors like climate change and intentional control. He offers a heartfelt ode to the continued importance of nonintervention in wilderness areas, even if doing so leads to unrecognizably changed landscapes."

"Throughout, Mark neatly blends the particular place details with broad maxims of wilderness philosophy, slanted toward the needs of earth’s future, and expressed with an eloquent originality. What’s more he does it with some charming descriptive passages."

— Sierra Club's Words of the Wild

"Mark journeys through wilderness that most of his readers will never see, and in doing so demonstrates why in just knowing there is wild, somewhere, we can remain grounded in our existence on the planet….If Mark romanticizes the refuge found in the wild, he makes no apologies for it. Satellites in the High Country is an evocative meditation on reconnecting our bond to the natural world, and why it is so important. But Mark’s is more than a romantic vision. It is also a pragmatic understanding that, to save ourselves, we’ll need to reconcile our fractured relationship to the wild in the Age of Man."
— Triple Pundit

"Through it all, [Mark] does a nice job of balancing historical fact and sociopolitical commentary with poetic passages that celebrate the breathtaking beauty of the natural world."

"Satellites in the High Country is an act of ground truthing on the nature of wildness at this moment in time. Author Jason Mark circumnavigates the American West with the eyes of an open-hearted sleuth, looking for what wild remains. Wildness, he discovers, is not only all around us, but inside us as well, having little to do with what is pristine or untouched and everything to do with nature’s intricate system of adaptation and response, function and beauty, and our innate capacity for awe. This book is a conversation with sanity."
— Terry Tempest Williams, author of "When Women Were Birds"

"Jason Mark is a great person to share an adventure with, whether out on the Arctic tundra or on the page. Satellites in the High Country is an engrossing exploration of the ever-evolving definition of what is 'wild' in America—which often reveals as much about us as it does about wilderness in the twenty-first century."
— Michael Brune, Executive Director, Sierra Club

"Satellites in the High Country is a brave and vigorous exploration of wilderness—its meaning, its necessity, its thunderous, rock-strewn reality. Jason Mark guides the reader across mountain passes and Arctic tussocks on a journey that is at once physical, philosophical, and political. His feet may be bruised, but his voice is strong, honest, and compelling. Read this book for an insightful and much-needed update on the centrality of wilderness in the contemporary American mind."
— Kathleen Dean Moore, author of "Great Tide Rising"

"Jason Mark revisits 'the wild' in our landscapes and in our minds. At a time when the wild—as a place and an idea—is being increasingly hemmed in, he offers fresh insights, unsettled questions, and renewed appreciation."
— Curt Meine, Aldo Leopold Foundation & Center for Humans and Nature

"In Satellites in the High Country, gripping accounts of outdoor journeys are linked with provocative thinking about the meaning of wildness in an increasingly human-controlled world. Jason Mark ably continues the writing style and themes of legends such as John Muir and Edward Abbey."
— Roderick Frazier Nash, author of "Wilderness and the American Mind"

"In Satellites in the High Country, Mark narrates his adventures in America’s wilderness with stunning detail. The dilemma of whether to leave nature to its own devices or tend it in order to preserve its ecological integrity is sensitively portrayed. Now more than ever, we need voices like Mark’s to illustrate this ever-complex relationship between mankind and nature, and to inspire us to care for our wild places."
— Jamie Williams, President of The Wilderness Society

"Mark gives an invitation to flee modernity and embrace mysterious nature as he shares the poetic insights he found in the wild."
— Foreword

Jason Mark's writings on the environment have appeared in The New York Times, TheAtlantic.com, The Nation, and Salon.com, among many other publications. He is the editor in chief of SIERRA magazine, was the longtime editor of Earth Island Journal, a quarterly magazine, and is a co-founder of San Francisco's largest urban farm. Time has called him "a rebel with a cause." For more, visit jasondovemark.com.
Loading...
or
Not Currently Available for Direct Purchase