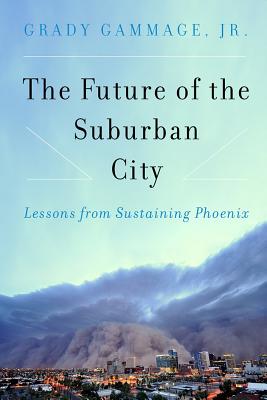 The Future of the Suburban City (Hardcover)

There exists a category of American cities in which the line between suburban and urban is almost impossible to locate. These suburban cities arose in the last half of twentieth-century America, based largely on the success of the single-family home, shopping centers, and the automobile. The low-density, auto-centric development of suburban cities, which are largely in the arid West, presents challenges for urban sustainability as it is traditionally measured. Yet, some of these cities—Los Angeles, Las Vegas, Phoenix, Salt Lake, Dallas, Tucson, San Bernardino, and San Diego—continue to be among the fastest growing places in the United States.

In The Future of the Suburban City, Phoenix native Grady Gammage, Jr. looks at the promise of the suburban city as well as the challenges. He argues that places that grew up based on the automobile and the single-family home need to dramatically change and evolve. But suburban cities have some advantages in an era of climate change, and many suburban cities are already making strides in increasing their resilience. Gammage focuses on the story of Phoenix, which shows the power of collective action — government action — to confront the challenges of geography and respond through public policy. He takes a fresh look at what it means to be sustainable and examines issues facing most suburban cities around water supply, heat, transportation, housing, density, urban form, jobs, economics, and politics.

The Future of the Suburban City is a realistic yet hopeful story of what is possible for any suburban city.

Grady Gammage, Jr. is a Senior Sustainability Scholar at Arizona State University’s Julie Ann Wrigley Global Institute of Sustainability and Senior Fellow at ASU’s Morrison Institute of Public Policy. He also teaches at the Sandra Day  O’Connor College of Law and at the W.P. Carey School of Business at ASU. Gammage is also a practicing lawyer, a real estate developer, and a former elected official.

Praise For The Future of the Suburban City: Lessons from Sustaining Phoenix…

"One of the sanest looks at our suburbs."
— Real Estate

"For high-carbon American desert cities facing down the fierce impact of climate change, the challenges seem insurmountable, and yet they continue to grow. As a seasoned urban advocate and real estate attorney, Gammage is uniquely positioned to tell us how a thirsty Western giant like Phoenix can become a resilient metropolis in the ever hotter and drier years to come."
— Andrew Ross, author of "Bird on Fire"

"Gammage is one of the few observers of the urban scene that really gets suburban cities. Unlike so many others who negatively judge and chastise suburban cities in the Southwest, Gammage seeks to understand these places on their own terms. This book greatly advances our knowledge of how these places work and shows how suburban cities proved far more resilient and sustainable than critics had expected."
— Robert E. Lang, Executive Director, Brookings Mountain West/The Lincy Institute, Professor of Urban Affairs, UNLV Senior Fellow, Brookings Institution

“Nobody knows more about Phoenix than Grady Gammage. The Future of the Suburban City is a good yarn about what it has taken to create a postwar Sunbelt metropolis—and what it will take to keep it going.”
— William Fulton, Director, the Kinder Institute for Urban Research at Rice University
or
Not Currently Available for Direct Purchase
Copyright © 2020 American Booksellers Association