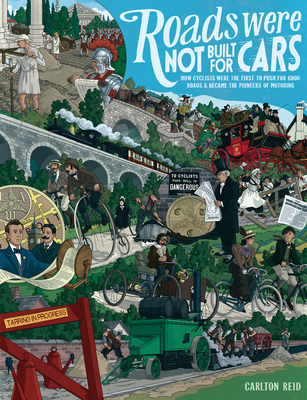 Roads Were Not Built for Cars

In Roads Were Not Built for Cars, Carlton Reid reveals the pivotal—and largely unrecognized—role that bicyclists played in the development of modern roadways. Reid introduces readers to cycling personalities, such as Henry Ford, and the cycling advocacy groups that influenced early road improvements, literally paving the way for the motor car. When the bicycle morphed from the vehicle of rich transport progressives in the 1890s to the “poor man’s transport” in the 1920s, some cyclists became ardent motorists and were all too happy to forget their cycling roots. But, Reid explains, many motor pioneers continued cycling, celebrating the shared links between transport modes that are now seen as worlds apart. In this engaging and meticulously researched book, Carlton Reid encourages us all to celebrate those links once again.

Praise For Roads Were Not Built for Cars: How cyclists were the first to push for good roads & became the pioneers of motoring…

"This fascinating insight into the origin of roads will break down some road ownership issues, and help promote harmony for all road users whether on four wheels or two."
— Edmund King

"Featuring an impressively informed and informative text that is occasionally enhanced with the inclusion of period illustrations, Roads Were Not Built for Cars: How Cyclists were the First to Push for Good Roads & Became the Pioneers of Motoring is an extraordinary cultural history that should be a part of every community and academic library collection."
— Reviewer's Bookwatch

"Roads Were Not Built For Cars is a major and original piece of work, and a significant contribution to social history. It is also an underpinning for current debates about the urban realm."
— Professor David Cox

"Cycling enthusiasts will enjoy learning about the influence of early cyclists on roadway development. But while Reid spends much of his time on cycling, he is also careful to examine the history of roads as thoroughfares, transportation networks, public spaces, as well as the roles they have played in broader trends...worthwhile reference...fascinating..."
— The Dirt

"This fascinating book examines the role of bicycles and cycling enthusiasts in the automobile industry and the US's 'good roads movement' of the late 1800s–early 1900s.  Reid has done an outstanding job of blending history, photographs and illustrations, short stories, quotes, facts, and informational pieces into an easy-to-read, thoroughly enjoyable book...This is a must read for anyone interested in planning and highway design as well as bicycle transportation."
— Choice