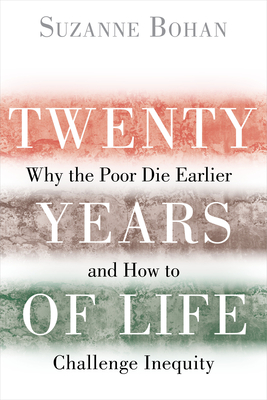 Why the Poor Die Earlier and How to Challenge Inequity

In Twenty Years of Life, Suzanne Bohan exposes the disturbing flip side of the American dream: your health is largely determined by your zip code. The strain of living in a poor neighborhood, with sub-par schools, lack of parks, fear of violence, few to no healthy food options, and the stress of unpaid bills is literally taking years off people’s lives. The difference in life expectancy between wealthy and distressed neighborhoods can be as much as twenty years.

Bohan chronicles a bold experiment to challenge this inequity. The California Endowment, one of the nation’s largest health foundations, is upending the old-school, top-down charity model and investing $1 billion over ten years to help distressed communities advocate for their own interests. This new approach to community change draws on the latent political power of residents and is driving reform both locally and in the state’s legislative chambers. If it can work in fourteen of California’s most challenging and diverse communities, it has the potential to work anywhere in the country.

Bohan introduces us to former street shooters with official government jobs; kids who convinced their city council members to build skate parks; students and parents who demanded fairer school discipline policies to keep kids in the classroom; urban farmers who pushed for permits to produce and sell their food; and a Native American tribe that revived its traditional forest management practices. Told with compassion and insight, their stories will fundamentally change how we think about the root causes of disease and the prospects for healing.

Praise For Twenty Years of Life: Why the Poor Die Earlier and How to Challenge Inequity…

"This book is filled with superheroes! Daring people who refused to watch their neighborhoods be plagued by avoidable and unjust inequities. Their stories provide a powerful blueprint that should inspire all of us to fight for justice and inclusion."
— Bechara Choucair, former Commissioner, Chicago Department of Public Health, and Senior Vice President/Chief Community Health Officer, Kaiser Permanente

"Must reading for anyone who cares about our nation's future. With thoughtful reporting and judicious use of data, Suzanne Bohan shows us where hope lies—with everyone committed to making change happen."
— Angela Glover Blackwell, Founder and CEO, PolicyLink

"Bohan provides such great and humane insight into the many ways in which neighborhood environments can conspire against good health. Even more importantly, she shows how communities can come together to build a better life. I found these stories both angering and inspiring."
— Linda Rudolph, Director, Center for Climate Change and Health, Public Health Institute

"In Twenty Years of Life, Suzanne Bohan shows how trauma, both structural and personal, works as a primary catalyst for the inequities experienced by poor people and people of color. Who among us will have the courage to respond with the urgency required? We are all on the clock..."
— Pastor Michael McBride, National Director, PICO's Urban Strategies and LIVE FREE Campaign

"In this slim but powerful volume, Suzanne Bohan takes us on a remarkable journey of discovery. With the skill of a researcher and the flair of a journalist, she charts how the field of public health came to understand that where you live is critical to your health—and explains how a California foundation came to believe that the only way to really alter those social and environmental determinants of well-being is to support grassroots power-building. As with many such paths, there are delightful surprises along the way—as when young people convince the foundation's board to invest in campaigns to alter school discipline policies or when the city manager of a town with a troubled history of police-community relations embraces the need to address systemic racism. In a nation wracked by division, polarization, and often inaction, these stories of listening, healing, and transformation offer a glimmer of hope for change. This is a compelling, important, and timely read."
— Manuel Pastor, Professor of Sociology and American Studies and Ethnicity, University of Southern California

"This is a remarkable book. It tackles, head on, one of the most perplexing problems of our time: why do Americans have poorer health than the residents of 40 other nations even though we spend much more money on healthcare? Could the reason involve more than medical care? Suzanne Bohan demonstrates how lack of access to good schools, housing, parks, food, and community support can influence our health. And she shows what can be done about it. This is a much-needed book that reveals our true health problem and offers real-life examples of how to solve it."
— S. Leonard Syme, Professor Emeritus, UC Berkeley

Suzanne Bohan spent twelve years as a reporter for the Bay Area New Group, which includes the San Jose Mercury News, Contra Costa Times, and Oakland Tribune. She won a prestigious White House Correspondents’ Association award in 2010 for her reporting on health disparities. Bohan is co-author of 50 Simple Ways to Live a Longer Life: Everyday Techniques From the Forefront of Science (Sourcebooks, 2005).