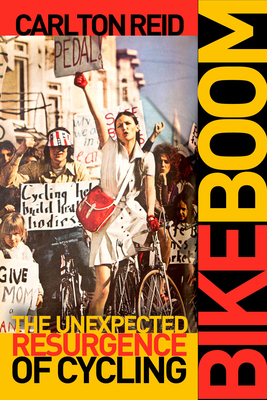 The Unexpected Resurgence of Cycling

Bicycling advocates envision a future in which bikes are a widespread daily form of transportation. While many global cities are seeing the number of bike commuters increase, this future is still far away; at times, urban cycling seems to be fighting for its very survival. Will we ever witness a true “bike boom” in cities? What can we learn from past successes and failures to make cycling safer, easier, and more accessible? Use of bicycles in America and Britain fell off a cliff in the 1950s and 1960s thanks to the rapid rise in car ownership. Urban planners and politicians predicted that cycling would wither to nothing, and they did their level best to bring about this extinction by catering to only motorists. But in the 1970s, something strange happened—bicycling bounced back, first in America and then in Britain.

In Bike Boom, journalist Carlton Reid uses history to shine a spotlight on the present and demonstrates how bicycling has the potential to grow even further, if the right measures are put in place by the politicians and planners of today and tomorrow. He explores the benefits and challenges of cycling, the roles of infrastructure and advocacy, and what we can learn from cities that have successfully supported and encouraged bike booms, including London; Davis, California; Montreal; Stevenage; Amsterdam; New York; and Copenhagen.

Given that today’s global bicycling “boom” has its roots in the early 1970s, Reid draws lessons from that period.  At that time, the Dutch were investing in bike infrastructure and advocacy— the US and the UK had the choice to follow the Dutch example, but didn’t. Reid sets out to discover what we can learn from the history of bike “booms” in this entertaining and thought-provoking book.

Praise For Bike Boom: The Unexpected Resurgence of Cycling…

"British journalist Carlton Reid fluently explains why bicycling has only had one real 'boom' in the past century-plus...The book will certainly make cycling advocates wiser."
— Planning

"A well-researched, well-argued book that should be compulsory reading for anyone involved in the provision of cycle facilities."
— Road.cc

"As this book demonstrates in sharp and illuminating detail, the world needs the bicycle now more than ever."
— Resurgence & Ecologist

"Reid has the easy and familiar style of the journalist, and the ability to help the reader form patterns with both cycle specific and general knowledge...this book is essential reading."
— Transport Reviews

"Well-written and researched. Throughout the text, illustrations...augment the narrative."
— Choice

"Bike Boom is full of heroes fighting for safe places for bikes, up against the Goliath of mass motorization. Carlton deftly tells the stories of the major battles over bikes in Europe and the United States from the 1930s through the 1970s. Not much has changed: we are still facing the same forces today, with the same arguments for and against. The book is a loving testament to yesterday's scrappy champions with lessons for all who persist today."
— Martha Roskowski, Vice President of Local Innovation, PeopleForBikes

"Carlton Reid brings an essential—and often forgotten—historical depth to ongoing debates about cycling and cycling infrastructure. In Bike Boom, he maps the deeply political struggles that are hidden behind seemingly technical, or even banal, issues. Indispensable reading for those trying to grasp cycling, but even more so for those who are fighting the continuous fight for its place in contemporary cities and societies."
— Marco te Brommelstroet, Academic Director, Urban Cycling Institute; Associate Professor in Urban Planning, University of Amsterdam

"Carlton Reid is one of the most well respected authors in the cycling world today, and with good reason. He is renowned for his political insight and meticulous research. Building on his earlier works—which delve into the history of this multi-purpose machine—Bike Boom is a beautifully fluid account of contemporary cycling and raises Carlton's reputation as a leading cycling aficionado to new heights."
— Chris Boardman, Senior Policy Advisor at British Cycling and Cofounder of Boardman Bikes

Carlton Reid is the executive editor of BikeBiz magazine, a publication for the bicycle trade based in the UK, and author of Roads Were Not Built for Cars (2015).
Loading...
or support indie stores by buying on