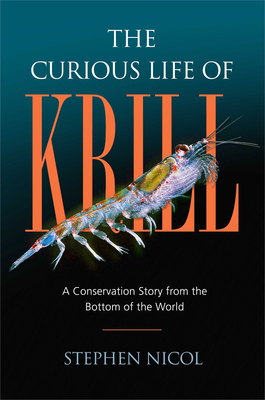 The Curious Life of Krill

A Conservation Story from the Bottom of the World

"Makes you feel as if you're part of an engaging dinnertime conversation." —Science News

Krill—it’s a familiar word that conjures oceans, whales, and swimming crustaceans. Scientists say they are one of most abundant animals on the planet. But when pressed, few people can accurately describe krill or explain their ecological importance. Antarctic krill have used their extraordinary adaptive skills to survive and thrive for millions of years in a dark, icy world far from human interference. But with climate change melting ice caps at the top and bottom of the world, and increased human activity and pollution, their evolutionary flexibility to withstand these new pressures may not be enough.

Eminent krill scientist Stephen Nicol wants us to know more about this enigmatic creature of the sea. He argues that it’s critical to understand krill’s complex biology in order to protect them as the krill fishing industry expands. This account of Antarctic krill-one of the largest of eighty-five krill species-takes us to the Southern Ocean to learn firsthand the difficulties and rewards of studying krill in its habitat. Nicol lays to rest the notion that krill are simply microscopic, shrimplike whale food but are in fact midway up the food chain, consumers of phytoplankton and themselves consumed by whales, seals, and penguins. From his early education about the sex lives of krill in the Bay of Fundy to a krill tattoo gone awry, Nicol uses humor and personal stories to bring the biology and beauty of krill alive. In the final chapters, he examines the possibility of an increasingly ice-free Southern Ocean and what that means for the fate of krill-and us.

Ocean enthusiasts will come away with a newfound appreciation for the complex ecology of a species we have much to learn from, and many reasons to protect.

Praise For The Curious Life of Krill: A Conservation Story from the Bottom of the World…

"As the Antarctic ecosystem warms, it becomes ever more important that we understand the biology of krill and how their adaptation to climate change will impact the other varied species that feed on them. Of interest to marine scientists and anyone concerned for the future of our oceans."
— Library Journal

"The book is an ode to Antarctic krill... [Its] conversational...style makes you feel as if you’re part of an engaging dinnertime conversation."
— Science News

"The Curious Life of Krill takes the reader deep into the Southern Ocean...Nicol writes passionately about [krill] biology, exploitation, and management."
— Nature

"A captivating little book...Nicol does a superb job of distilling crustacean biology, hard-won personal experience, and interesting history into a book that never gets a chance to outstay its welcome. If you have even the slightest interest in books on oceanography, marine ecosystems, or the many interesting creatures that live here you should most certainly add this book to your reading list."
— Inquisitive Biologist

"Builds a clear and credible picture of the Southern Ocean krill story based on the career of a biologist committed to the subject."
— Fish and Fisheries

"The Curious Life of Krill offers a newfound appreciation for the complex ecology of a species we have much to learn from, and many reasons to protect. An exceptional and impressively informative study...unreservedly recommended."
— Midwest Book Review

“A gem…this book entertains as much as informs…Nicol is the ideal krill champion, giving us facts and history interwoven with anecdotes, personal experiences, and insights into the lives of these fascinating creatures…Having read it once, I immediately wanted to read it again.”
— Conservation Biology

"An essential reflection on an essential set of creatures. With wit and hard-earned wisdom, Stephen Nicol reveals how krill drive the ecosystems at the bottom of the world and how, in an era of profound climate change, they require our most careful attention."
— Paul Greenberg, Correspondent for Frontline's "The Fish on My Plate," and author of "Four Fish" and "American Catch"

"Krill expert Stephen Nicol transports us to the world of one of the ocean's most important, least-understood creatures. A krill is indeed curious: its ability to shrink when short of food, its intricate relationship with Antarctic sea ice, and its critical role in great-whale ecosystems. Read this book and you will understand our human relationship with krill, and feel that you have swum with it through Antarctic seas."
— David Agnew, Director of Science, Marine Stewardship Council

Stephen Nicol, one of the world’s foremost experts on krill, has spent decades as an Antarctic krill research scientist and program leader for the Australian government.  He is an adjunct professor in the Institute for Marine and Antarctic Studies, University of Tasmania, in Hobart, and is the recipient of the Australian Antarctic Medal for outstanding contributions to Antarctic research.