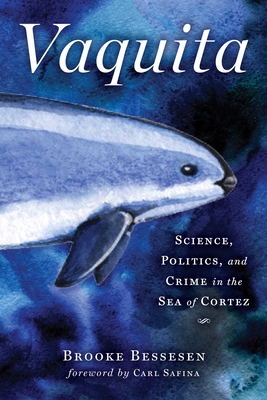 Science, Politics, and Crime in the Sea of Cortez

"Gripping...a well-told and moving tale of environmentalism and conservation." —Kirkus

In 2006, vaquita, a diminutive porpoise making its home in the Upper Gulf of California, inherited the dubious title of world’s most endangered marine mammal. Nicknamed “panda of the sea” for their small size and beguiling facial markings, vaquitas have been in decline for decades, dying by the hundreds in gillnets intended for commercially valuable fish, as well as for an endangered fish called totoaba. When international crime cartels discovered a lucrative trade in the swim bladders of totoaba, illegal gillnetting went rampant, and now the lives of the few remaining vaquitas hang in the balance.

Author Brooke Bessesen takes us on a journey to Mexico’s Upper Gulf region to uncover the story. She interviewed townspeople, fishermen, scientists, and activists, teasing apart a complex story filled with villains and heroes, a story whose outcome is unclear. When diplomatic and political efforts to save the little porpoise failed, Bessesen followed a team of veterinary experts in a binational effort to capture the last remaining vaquitas and breed them in captivity—the best hope for their survival. In this fast-paced, soul-searing tale, she learned that there are no easy answers when extinction is profitable.

Whether the rescue attempt succeeds or fails, the world must ask itself hard questions. When vaquita and the totoaba are gone, the black market will turn to the next vulnerable species. What will we do then?

Praise For Vaquita: Science, Politics, and Crime in the Sea of Cortez…

"Vaquita is a lucid, informed, and gripping account of a species that will soon be lost in the absence of effective actions...Bessesen approaches the plight of the vaquita with the thoroughness and inquisitiveness of a scientist and the passion of an environmentalist. She has written a must-read for anyone keen to understand the realities of protecting biodiversity. In doing so, she fulfilled a promise she made to a small female vaquita that died from entanglement in a gillnet: 'I will tell your story...'"
— Science

"Gripping...a well-told and moving tale of environmentalism and conservation."
— Kirkus

"A compelling story surrounding yet another species imperiled by human activities."
— Library Journal

"This is a good, passionate, informed, thrilling, and easily readable book for anyone interested in cetaceans, animals in general, and human perspectives and relationships with animals. Bessesen presents an inconvenient truth that serves of a reminder of the recent mistakes that led to the extinction of the Yangtze River dolphin....A powerful invitation to think about the sometimes blurred lines between science, politics, culture, and economy...Parties must join forces now to protect endangered species.
— Conservation Biology

"[Bessesen], with endless determination and at no small risk to herself, explored both the world of the porpoise and a web of greed and corruption as deadly as the gillnets that may be the last thing the last vaquita ever sees...If the heroes in this book do not inspire you, you have no heart: if the villainy does not infuriate you, you have no soul. That's how memorable this book is."
— Matt's Sci/Tech blog

"If Rachel Carson had written a True Crime book, it might read like Brooke Bessesen's Vaquita. This fast-paced story of pirate fishermen, smugglers, killer cartels, dedicated scientists, whale warriors, and Navy dolphins is also a cautionary tale. It's no longer about saving the dolphins or the whales. It's about saving ourselves."
— David Helvarg, author of "The Golden Shore: California's Love Affair with the Sea"

"The story of the critically endangered vaquita desperately needs telling—and no one can tell it better than Brooke Bessesen. She writes with authority and heart of a conservation crisis that must be addressed now—lest we lose forever, on our watch, the world's smallest and most mysterious porpoise."
— Sy Montgomery, National Book Award Finalist for "Soul of an Octopus"

"The vaquita's story is a morality tale for the Anthropocene. How many species will we let slip to their extinction in full knowledge of what is happening, and with the means to prevent their loss so readily available? This beautifully written book serves as a warning that half-measures and compromises in conservation have terrible consequences; opportunities missed may be missed forever."
— Callum Roberts, Professor of Marine Conservation, University of York, United Kingdom

Brooke Bessesen has worked with wildlife for over thirty years in animal rescue, veterinary medicine, and field biology. As a research fellow, she has conducted marine studies in Costa Rica and authored several scientific articles, including one naming a new taxon of sea snake. She has also written five children’s books and a popular Arizona wildlife guide. As the founder of Authors for Earth Day, she directs an international coalition of authors who educate school kids about conservation.