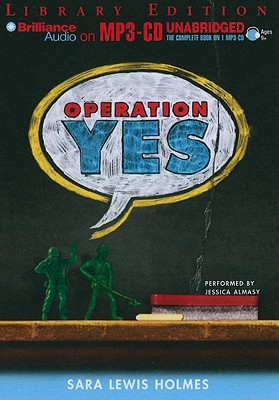 PLAN A Bo is going to behave for his new teacher. His father, an Air Force colonel, says so. Gari is going to live peacefully with her cousin. Her mother, an Army nurse, says so. Miss Loupe is going to teach her class language arts, social studies, math, and science. What's supposed to stay secret: the theater lessons and her tattoo. PLAN B Bo stages a food fight. His father isn t pleased. Gari stages a protest. The Army isn t pleased. And when something happens that none of them could plan for... they lose Miss Loupe too. And what comes out of that is ... PLAN C It involves misbehaving and working together. Protests, fighting and making something amazing. For everyone's parents. Everyone's families. It's a plan so big, so daring, so life-changing, that it can only be called: OPERATION YES.