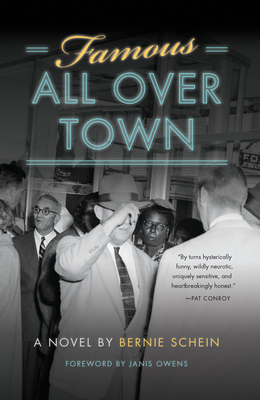 Novelist Walker Percy once said that the only remaining unexplored territory in Southern literature was the Jewish southerner. Famous all over Town, the first novel from Southern storyteller Bernie Schein, stakes a claim on Percy's unexplored terrain with a comically candid multi-generational account of two Jews, a lowcountry native and a Northern transplant, at the epicenter of momentous events in the sleepy southern coastal hamlet of Somerset, a fictitious stand-in for Schein's native Beaufort, South Carolina.

Delving beneath the surface of the Southern status quo, Schein's tale follows these interconnected lives through the private and public upheavals in small-town life from the turbulent 1960s to the eve of the new millennium, confronting the ramifications of the civil rights era, Vietnam, Watergate, and--closer to home--a deadly version of the infamous Ribbon Creek incident. Somerset's colorful citizens also confront their own repressed memories, conflicted identities, burgeoning ambitions, and romantic entanglements. Even as events unfold to often-uproarious effect, Schein's novel holds true to a deeply realized sense of intimacy and authenticity in the interactions of its myriad characters as revelations expose how these disparate lives are conjoined in surprising ways. Shifting points of view place readers squarely in the mindsets of many of Somerset's key citizens as Schein lovingly and laughingly invites us to reconsider what it means in the modern South to be white, black, Jewish, Christian, military, civilian, sane, insane, old, young, male, female, gay, and straight--and to be of a place rather than merely in it.

Retired educator Bernie Schein is the author of If Holden Caulfield Were in My Classroom: Inspiring Love, Creativity, and Intelligence in Middle School Kids and, with his wife, Martha Schein, coauthor of Open Classrooms in the Middle School. He holds an Ed.M. from Harvard University with an emphasis in educational psychology. A forty-year veteran of middle school instruction and administration, Schein has served as the principal of schools in Mississippi and South Carolina and helped found the independent Paideia School in Atlanta, where he was honored as Atlanta's District Teacher of the Year in 1978. His stories and essays have appeared in Atlanta Magazine, Atlanta Weekly, the Beaufort Gazette, Creative Loafing, Lowcountry Weekly, and the Mississippi Educational Advance, and he has been interviewed on National Public Radio.
Loading...
or
Not Currently Available for Direct Purchase