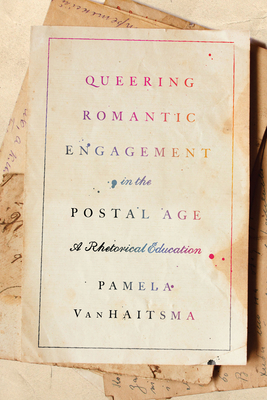 Romantic letters are central to understanding same-sex romantic relationships from the past, with debates about so-called romantic friendship turning on conflicting interpretations of letters. Too often, however, these letters are treated simply as unstudied expressions of heartfelt feeling. In Queering Romantic Engagement in the Postal Age: A Rhetorical Education, Pamela VanHaitsma nuances such approaches to reading letters, showing how the genre should be understood instead as a learned form of epistolary rhetoric.

Through archival study of instruction in the romantic letter genre, VanHaitsma challenges the normative scholarly focus on rhetorical education as preparing citizen subjects for civic engagement. She theorizes a new concept of rhetorical education for romantic engagement--defined as instruction in language practices for composing romantic relations--to prompt histories that account for the significant yet unrealized role that rhetorical training plays in inventing both civic and romantic life.

VanHaitsma's history of epistolary instruction in the nineteenth-century United States is grounded in examining popular manuals that taught the romantic letter genre; romantic correspondence of Addie Brown and Rebecca Primus, both freeborn African American women; and multigenre epistolary rhetoric by Yale student Albert Dodd. These case studies span rhetors who are diverse by gender, race, class, and educational background but who all developed creative ways of queering cultural norms and generic conventions in developing their same-sex romantic relationships. Ultimately, Queering Romantic Engagement in the Postal Age argues that such rhetorical training shaped citizens as romantic subjects in predictably heteronormative ways and simultaneously opened up possibilities for their queer rhetorical practices.

Pamela VanHaitsma is an assistant professor at Penn State University. The 2015 recipient of the Rhetoric Society of America's Charles Kneupper Award for an essay in Rhetoric Society Quarterly, she has also published work in Advances in the History of Rhetoric, College Composition and Communication, Peitho, College English, and Rhetoric Review, among others.
Loading...
or support indie stores by buying on