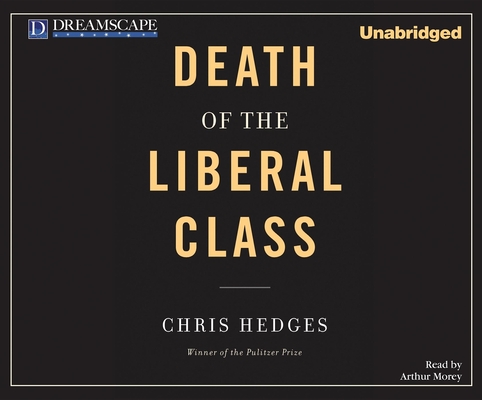 The liberal class plays a vital role in a democracy, and posits itself as the conscience of the nation. It permits us to define ourselves as a good and noble people. Most importantly, the liberal class offers a safety valve for popular frustrations and discontentment by discrediting those who talk of profound structural change. Once this class loses its role, then democracy breaks down and the liberal class becomes an object of ridicule and hatred. The Death of the Liberal Class examines the failure of the liberal class to confront the rise of the corporate state and the consequences of a bankrupt liberalism, making the liberal class irrelevant to society at large and ultimately the corporate power elite they once served.


Praise For Death of the Liberal Class…

"Death of the Liberal Class is a book all liberals should read to reassess their own role in American democracy."  - Caroline Cox, Harvard Political Review

"an engaging, powerful and important work that deserves to be widely read and enthusiastically debated." - Ottawa Citizen

Chris Hedges is a senior fellow at the Nation Institute and the Anschutz Distinguished Fellow at Princeton University. He is the author of the bestselling War Is a Force That Gives Us Meaning, which was a finalist for the National Book Critics Circle Award in Nonfiction. He currently writes for numerous publications, including Harper's, The New York Review of Books, and Mother Jones. A columnist for Truthdig, he lives in Princeton, New Jersey. READER BIOArthur Morey has performed in New York, Chicago, and Milan. He has freelanced scripts and won awards for both plays and fiction. A former literary manager, he has taught acting and writing. Winner of five AudioFile Earphones Awards, he has narrated novels by John Irving, Nathan Englander, Richard Russo, and John Burnam Schwartz, as well as nonfiction by Kurt Eichenwald, John McCain, George Tenet, Deepak Chopra, Gay Talese, and others.
Loading...
or
Not Currently Available for Direct Purchase