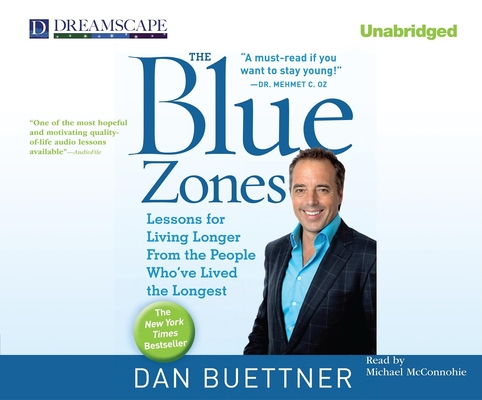 Lessons for Living Longer from the People Who've Lived the Longest

Award-winning author and researcher Dan Buettner has traveled the world to meet the planet's longest-lived people, and learned nine powerful yet simple lessons that could put you on the path to longer life. Where did he find them? In the Blue Zones. Blue Zones are communities where common elements of lifestyle, diet and outlook have led to an amazing quantity - and quality - of life. Dan Buettner shares the secrets from four of the world's Blue Zones. Buettner's extensive study uncovers how these people manage to live longer and better, but found in the everyday things they do: the food they eat, the company they keep, and their very perspectives on life. In The Blue Zones, they become yours to follow for life.

Praise For The Blue Zones: Lessons for Living Longer from the People Who've Lived the Longest…

"...one of the most hopeful and motivating quality-of-life audio lessons available."
- AudioFile Magazine

Dan Buettner is an internationally recognized researcher, explorer, and author. He founded Blue Zones(TM) to research and publicize the world's best practices in health, longevity, and happiness. A pioneer in exploration and education, he has traveled the world to answer some of science's biggest questions. Dan's National Geographic cover story on Blue Zones was one of the top-selling covers in the magazine's history, and the book hit The New York Times bestseller list. READER BIOMichael McConnohie has done extensive voice work for countless cartoons, video games, commercials, and audiobooks. He is the President of the Nevada-based Voxworks voice-acting corporation. Michael's audiobook credits include narrating Fritjof Capra's The Tao of Physics, Stuart M. Kaminsky's Earphones Award-winning Always Say Goodbye, Noah Boyd's The Bricklayer, and C. David Heyman's Liz: An Intimate Biography of Elizabeth Taylor.
Loading...
or support indie stores by buying on