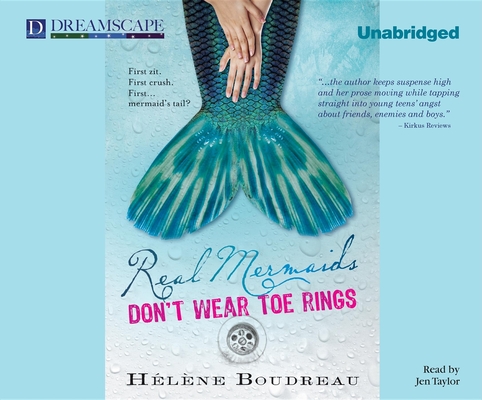 First zit. First crush. First...mermaid's tail? Fourteen-year-old Jade feels like a freak-of-nature when she finally gets her first period while trying on an XL tankini at the mall. It gets worse when she runs into handsome Luke Martin in the feminine products aisle while her dad Googles 'menstruation' on his BlackBerry. But 'freak-of-nature' takes on a whole new meaning when raging hormones bring on another metamorphosis - complete with scales and a tail. When Jade learns she's inherited her mermaid tendencies from her late mother, it raises the question: if Mom was a mermaid, how did she drown?

Helene Boudreau writes fiction and nonfiction for children and young adults from her home in Ontario. Her debut middle grade novel, Arcadian Star, was nominated for the 2009/2010 Hackmatack Children's Choice Book Award.READER BIOJen Taylor is a professional actress hailing from Seattle, Washington. She graduated from Northwestern University with a degree in Theatre and quickly jumped into the world of radio. Jen performs on stage, in radio and television commercials and on the air as a disc jockey for a Seattle radio station.
Loading...
or
Not Currently Available for Direct Purchase