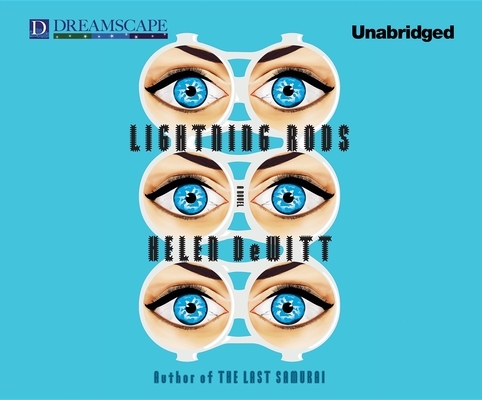 "All I want is to be a success. That's all I ask." Joe fails to sell a single set of the Encyclopedia Britannica in six months. Then he fails to sell a single Electrolux and must eat hundreds of pieces of homemade pie, served up by his would-be customers who feel so sorry for him. Holed up in his trailer, Joe finds an outlet his for frustrations in a series of ingenious sexual fantasies, and at last strikes gold. His brain storm, Lightning Rods, Inc., will take Joe to the very top - and to the very heart of corporate insanity - with an outrageous solution to the spectre of sexual harassment in the modern office.

A 2011 editor's choice. - Audible.com
"The novel is artful without artifice, unabashedly blunt in all matters sexual, and scathing in its satirical attack on sexual harassment in the workplace." - AudioFile Magazine
"...funny, filthy...its true brilliance lies in DeWitt’s careful deployment of language..." - New York Times
"an original, sometimes titillating, exploration of human nature and American initiative." - Booklist
"DeWitt's deadpanned humor makes this slim book into a complex story that works as both surrealist metaphor and corporate parody." - New York Observer, "Fall Arts Preview: Top Ten Books"
"Hyper-contemporary and artfully allegorical, Lightning Rods is a sprightly lampoon, full of corporate babble and technical jargon. It's laugh-out-loud funny, and unnervingly true...[Narrator] Dushko Petrovich's narration exaggerates DeWitt's humor without forsaking the seriousness of her satire. Lightning Rods should be required for...everyone in America." - eMusic
"Lightning Rods is A Modest Proposal for our sexually emancipated age. The only guilt involved in this pleasure will come to those who miss it." - Barnes & Noble Review
"Intelligent, funny, and absurd, Lightning Rods critiques contemporary perspectives on sex, capitalist logic, and the workplace." - Critical Mob
"In Lightning Rods, the nonperil Helen DeWitt has written a hilarious and pretty near perfect novel about...well, about selling and sex and the sound of the stories we tell ourselves, and of the stories we tell ourselves about the stories we tell ourselves, and of the stories we sell to others to help them have another story to sell to themselves, and about...did I mention sex? Lightning Rods is a strange and ingenious and happy-about-the-state-literature-making book." - Rivka Galchen, author of Atmospheric Disturbances
"Helen DeWitt shocks the reader with her intelligence. Lightning Rods, an exploration of the collective Id, is as lucid, methodical, and elegantly argued as a mathematical proof. It is also unremittingly filthy. DeWitt begins with a premise and goes on to think everything thinkable about it. A weird, generous, hilarious marvel." - Teju Cole, author of Open City
"Lightning Rods is one of the funniest, most unlikely, and most pleasurable novels I have ever read. If Henry Ford and Henry Miller got together to write a book, the result would be something like this." - Sheila Heti, author of We Need a Horse
"Savagely funny and wilfully provocative, Lightning Rods sees Helen DeWitt lets her fearless imagination run riot. A satirist up there with Swift and Orwell..." - Anthony Holden, author of Big Deal

Helen DeWitt is best known for her acclaimed debut novel, The Last Samurai. She held a variety of jobs while struggling to finish a book, including a dictionary text tagger, a copytaker, Dunkin' Donuts employee, and working in a laundry service. During this time she reportedly attempted to finish many novels, before finally completing The Last Samurai, her 50th manuscript, in 1998. She has since written several other novels. She lives in Berlin.READER BIODushko Petrovich is a painter and writer who lives in New Haven, Connecticut. He has exhibited his work in the US and Europe, and he contributes regularly to publications such as Slate, the Boston Globe, and Modern Painters. In addition to teaching art at Boston University and the Rhode Island School of Design, he is a founding editor of Paper Monument.
Loading...
or
Not Currently Available for Direct Purchase