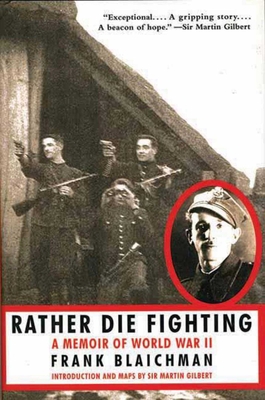 A Memoir of World War II

This is a harrowing, utterly moving memoir of a young Polish Jew who chose not to go quietly and defied the mighty Nazi war machine during World War II.

Frank Blaichman was sixteen years old when the war broke out. In 1942, the killings began in Poland. With his family and friends decimated by the roundups, Blaichman decided that he would rather die fighting; he set off for the forest to find the underground bunkers of Jews who had already escaped. Together they formed a partisan force dedicated to fighting the Germans. Table of Contents:

“IT IS AN HONOR TO WRITE a few words of introduction to this exceptional memoir. The Holocaust was on such a vast scale that no amount of published recollections by survivors could ever tell the complete story. Each memoir adds an important element: an aspect of the narrative, an account of survival, a testimony to human suffering and endurance. In this memoir, we learn a great deal about one of the neglected aspects of the Jewish experience during the Second World War: the acts of resistance carried out by those who found the means, and the will, to challenge the mighty German war machine and apparatus of destruction. Frank Blaichman commanded a Jewish partisan platoon. These seven words, so simple, and at the same time so unusual, mask a story of drama and danger, a story of which the Jewish people can be proud.”—Sir Martin Gilbert, from his Introduction