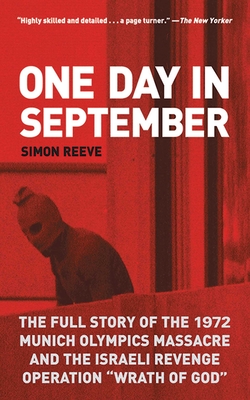 One Day in September

At 4:30 a.m. on September 5, 1972, a band of Palestinian terrorists took eleven Israeli athletes and coaches hostage at the Summer Olympics in Munich. More than 900 million viewers followed the chilling, twenty-hour event on television, as German authorities desperately negotiated with the terrorists. Finally, late in the evening, two helicopters bore the terrorists and their surviving hostages to Munich's little-used Fürstenfeldbruck airfield, where events went tragically awry. Within minutes all of the Israeli athletes, five of the terrorists, and one German policeman were dead.

Why did the rescue mission fail so miserably? And why were the reports compiled by the German authorities concealed from the public for more than two decades? Reeves takes on a catastrophe that permanently shifted the political spectrum with a fast-paced narrative that covers the events detail by detail. Based on years of exhaustive research, One Day in September is the definitive account of one of the most devastating and politically explosive tragedies of the late twentieth century, one that set the tone for nearly thirty years of renewed conflict in the Middle East.

Simon Reeve is a bestselling author and an award-winning television presenter. His book The New Jackals: Ramzi Yousef, Osama bin Laden and the Future of Terrorism, which warned of apocalyptic terrorist attacks, was the first in the world on bin Laden and al Qaeda. Originally published in 1998, it has been a New York Times bestseller. He is based in the UK, but has spent the last few years traveling around the world filming award-winning BBC travel documentaries.
Loading...
or
Not Currently Available for Direct Purchase