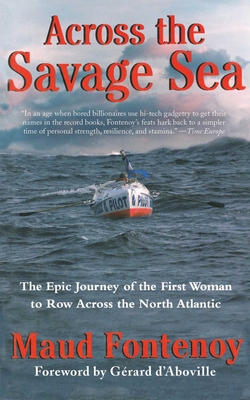 Across the Savage Sea

Over the last century only six men had defied the power of nature and successfully rowed across the Atlantic from west to east. Maud Fontenoy, a 2005 Time (Europe) Hero, changed that forever when she became the first woman to do so. In 2003 Fontenoy, a young woman and seasoned mariner, set out from Newfoundland in her twenty-four-foot-long boat, Pilot, to row across the North Atlantic. Her goal: to prove that a woman could do what men once believed to be impossible. It became a journey both far more harrowing than even she had imagined and one full of unexpected wonders. Her extraordinary story continues to inspire.

Maud Fontenoy was born to the sea, having lived on her parents’ fifty-five-foot schooner for the first fifteen years of her life. When she accomplished her miraculous crossing, she was twenty-five years old. On March 26, 2005, she became the first woman to row solo across the South Pacific. She lives in France.

Martin Sokolinsky is a writer and translator. He has worked on books by Omar Sharif, Albert Kantof, and Nobel Laureate Camilo Jose Cela. He lives in New York City.

Gérard d’Aboville is the first man to row across two oceans solo: the Atlantic Ocean and the Pacific Ocean. He crossed the Atlantic in 1980, traveling from Cape Cod to Brittany. At the age of forty-five, he spent one hundred and thirty-four days at sea in order to cross the Pacific, traveling from Japan to Washington State. He currently lives in Paris.
Loading...
or
Not Currently Available for Direct Purchase