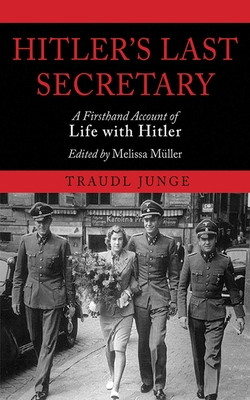 Called "a remarkable historical document" (Guardian) and "undoubtedly a primer on the so-called 'banality of evil'" (Publishers Weekly), an extraordinary window on a personality and period of history that continue to fascinate.

In 1942 Germany, Traudl Junge was a young woman with dreams of becoming a ballerina when she was offered the chance of a lifetime. At the age of twenty-two she became private secretary to Adolf Hitler and served him for two and a half years, right up to the bitter end. Her memoir, which she wrote not long after the end of the war when her memories were still fresh, offers a unique and chilling glimpse of the human face of a man known to posterity as a monster.

Junge observed the intimate workings of Hitler’s administration, she typed correspondence and speeches, including Hitler’s public and private last will and testament; she ate her meals and spent evenings with him; and she was close enough to hear the bomb that was intended to assassinate Hitler in the Wolf’s Lair, close enough to smell the bitter almond odor of Eva Braun’s cyanide pill. She heard the shot with which Hitler ended his own life. In her intimate, detailed memoir, Junge invites readers to experience day-to-day life with the most horrible dictator of the twentieth century.

Mellisa Müller contributes a substantial introduction and afterword, putting the memoir in context and providing a brief biography of Junge before and after the Hitler years.

Praise For Hitler's Last Secretary: A Firsthand Account of Life with Hitler…

"Junge’s account, undoubtedly a primer on the so-called "banality of evil," is a detailed, efficient and humorless memoir of the three years she spent as Hitler’s secretary. Her tale—full of trivial tidbits and, often interchangeably, chilling observations—draws a picture of a man at once astonishingly uninspired, quixotic and devoted to his cause."—Publishers Weekly

"Until the Final Hour is a remarkable historical document (and it comes with a good afterword by its editor, Melissa Müller, which describes Junge's miraculous escape from Berlin, her time in a Russian prison camp and, most poignantly, her old age: depressed, guilt-ridden, alone). But more than this, it is another painful reminder of how it is possible for a person—or even an entire nation—to sleepwalk slowly into sin. You put the book down and your skin prickles with the knowledge that, out in the world, there will always be invisible lines to be crossed. Mistakes: how easily they are made."—Guardian

"Until the Final Hour is the more imposing book for what it reveals about Junge, an ordinary German citizen, innocently (at first) caught up in extraordinary things. . . .  It is all the humdrum, quotidian 'undistanced' details that make the book important. Hannah Arendt's phrase "the banality of evil" may be in danger of becoming a banality itself, but not of becoming an untruth."—Pittsburgh Post-Gazette

Traudl Junge was born in Munich in 1920. From the end of 1942 until April 1945 she was Hitler’s private secretary. After the war she was sent to a Russian prison camp and later returned to Germany. She died on February 10, 2002, shortly after the publication of the German edition of her book.

Melissa Müller, a writer of the controversial and much praised documentary based on Traudl Junge's time with Hitler called Blind Spot: Hitler's Last Secretary, persuaded Junge to finally publisher her memoir in 2002, nearly sixty years after she had written it.
Loading...
or support indie stores by buying on
(This book is on backorder)