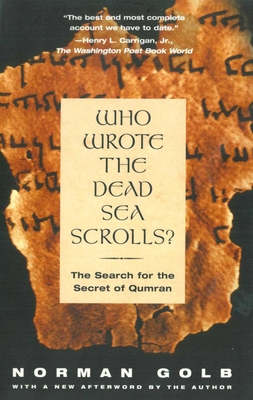 The Search for the Secret of Qumran

Since their discovery in the Qumran caves in the beginning in 1947, the Dead Sea Scrolls have been the object of intense fascination and extreme controversy. Here Professor Norman Golb intensifies the debate over the scrolls’ origins, arguing that they were not the work of a small, desert-dwelling fringe sect, as other scholars have claimed, but written by many different groups of Jews and the smuggled out of Jerusalem’s libraries before the Roman siege of A.D. 70.

Golb also unravels the mystery behind the scholarly monopoly that controlled the scrolls for many years, and discusses his role as a key player in the successful struggle to make the scrolls widely available to both scholars and students. And he pleads passionately for an end to academic politics and a renewed commitment to the search for truth in scroll scholarship.