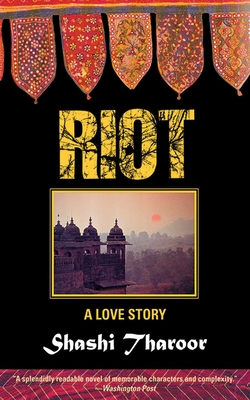 Who killed twenty-four-year-old Priscilla Hart? This highly motivated, idealistic American student had come to India to volunteer in women’s health programs, but had her work made a killer out of an enraged husband? Or was her death the result of a xenophobic attack? Had an indiscriminate love affair spun out of control? Had a disgruntled, deeply jealous colleague been pushed to the edge? Or was she simply the innocent victim of a riot that had exploded in that fateful year of 1989 between Hindus and Muslims?
Experimenting masterfully with narrative form in this brilliant tour de force, internationally acclaimed novelist Shashi Tharoor chronicles the mystery of Priscilla Hart’s death through the often contradictory accounts of a dozen or more characters, all of whom relate their own versions of the events surrounding her killing. Like his two previous novels, Riot probes and reveals the richness of India, and is at once about love, hate, cultural collision, the ownership of history, religious fanaticism, and the impossibility of knowing the truth.

Shashi Tharoor was born in London and brought up in Bombay and Calcutta. He has written for the New York Times, the Washington Post, the International Herald Tribune, the Times of India, and Foreign Affairs. A human rights activist and winner of a Commonwealth Writers Prize, he is currently a member of the Indian Parliament and lives in New Dehli, India.
Loading...
or
Not Currently Available for Direct Purchase