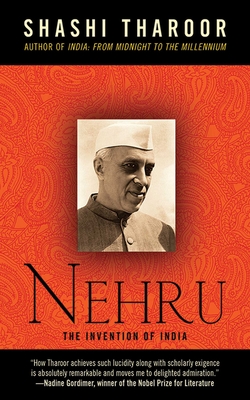 The Invention of India

Shashi Tharoor delivers an incisive biography of the great secularist who—alongside his spiritual father, Mahatma Gandhi—led the movement for India’s independence from British rule and ushered his newly independent country into the modern world. The man who would one day help topple British rule and become India’s first prime minister started out as a surprisingly unremarkable student. Born into a wealthy, politically influential Indian family in the waning years of the Raj, Jawaharlal Nehru was raised on Western secularism and the humanist ideas of the Enlightenment.
Once he met Gandhi in 1916, Nehru threw himself into the nonviolent struggle for India’s independence, a struggle that wasn’t won until 1947. India had found a perfect political complement to her more spiritual advocate, but neither Nehru nor Gandhi could prevent the horrific price for independence: partition. This fascinating biography casts an unflinching eye on Nehru’s heroic efforts for, and stewardship of, independent India and gives us a careful appraisal of his legacy to the world.

Shashi Tharoor was born in London and brought up in Bombay and Calcutta. He has written for the New York Times, the Washington Post, the International Herald Tribune, the Times of India, and Foreign Affairs. A human rights activist and winner of a Commonwealth Writers Prize, he is currently a member of the Indian Parliament and lives in New Dehli, India.
Loading...
or
Not Currently Available for Direct Purchase