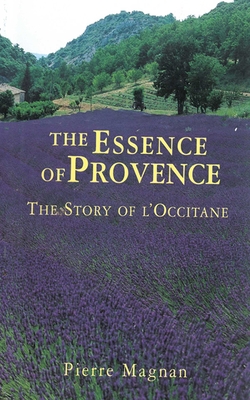 The Essence of Provence (Paperback)

The Story of L'Occitane

The extraordinary rags-to-riches tale of Olivier Baussan and the roadside soap stand that became L’Occitane, one of the world’s most successful purveyors of natural fragrances. Founded in 1976 by Olivier Baussan, the now world-renowned fragrance company L’Occitane, “a woman of Provence” in Old French, was inspired by the essences of lavender and honeysuckle, rosemary, sage, and thyme indigenous to his childhood home in the south of France. In fact, it had been since the mid-1950s that Provence had been working its magic on the Baussan family, who left their urban life for a farm in Ganagobie when their son Olivier was only six months old.
Blessed with a wonderfully acute sense of smell, Olivier eventually grew up to realize that he’d been born to distill and disseminate the many and varied perfumes of the region. His epiphany came when, at twenty-two, he found an abandoned still on the side of the road and bought it for a song. Using the countryside’s natural ingredients, he began manufacturing shampoos, colognes, bath essences, and soaps. Starting with five employees—including Olivier’s wife and mother-in-law—his fledgling company grew into a major business. Today, with hundreds of stores and thousands of employees worldwide, L’Occitane ranks as one of the world’s most successful businesses—encapsulating a bit of paradise.
or
Not Currently Available for Direct Purchase
Copyright © 2020 American Booksellers Association