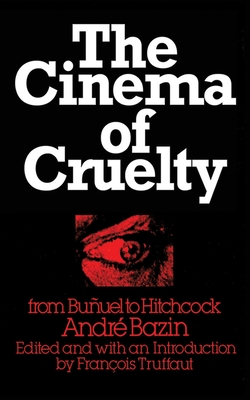 The Cinema of Cruelty (Paperback)

From Buñuel to Hitchcock

Perhaps the single most important voice of cinema in the twentieth century, André Bazin profoundly influenced the development of the scholarship that we know now as film criticism. Bazin has acutely analyzed the cinematic values of our time, extending to his international audiences “the impact of art for the understanding and discrimination of his readers.”

The depth and logic of his commentary has elevated film criticism to new heights. The reputation of André Bazin continues to grow as his writings are published and studied by filmmakers and filmgoers alike. Often referred to as the Edmund Wilson of film, Bazin was more than a critic. “He made me see certain aspects of my work that I was unaware of,” said Luis Buñuel. “He was our conscience,” wrote Jean Renoir. “He was a logician in action,” echoed François Truffaut.

In The Cinema of Cruelty, François Truffaut, one of France’s most celebrated and versatile filmmakers, has collected Bazin’s writings on six film “greats”: Erich von Stroheim, Carl Dreyer, Preston Sturges, Luis Buñuel, Alfred Hitchcock, and Akira Kurosawa. The result is a major collection of film criticism.
or support indie stores by buying on
(This book is on backorder)
Copyright © 2020 American Booksellers Association