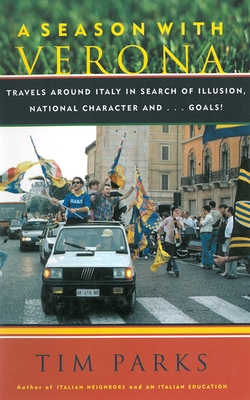 A Season with Verona

A Soccer Fan Follows His Team Around Italy in Search of Dreams, National Character and . . . Goals!

Is Italy a united country, or a loose affiliation of warring states? Is Italian football (which we Americans know as “soccer”) a sport, or an ill-disguised protraction of ancient enmities? After twenty years in the bel paese, Tim Parks goes on the road to follow the fortunes of his hometown soccer club, Hellas Verona, to pay a different kind of visit to some of the world’s most beautiful cities, and to get a fresh take on the conundrum that is national character.
From Udine to Catania, from the San Siro to the Olimpico, traveling with the raucous and unruly Verona fans—whose conduct is a cross between that of asylum inmates and the Keystone Kops—Tim Parks offers his highly personal account of one man’s relationship with a country, its people, and its national sport. The clubs are struggling, as always, to keep their heads above water in Series A. The fans, as always, are accused of vulgarity, racism, and violence. It’s an election year and politics encroaches. The police are ambiguous, the journeys exhausting, the referees unforgivable, the anecdotes hilarious. And behind it all is the growing intuition that in a world stripped of idealism and bereft of religion, soccer offers a new and fiercely ironic way of forming community and engaging with the sacred.

Tim Parks is the author of more than twenty novels and works of nonfiction. His novels include Europa, which was shortlisted for the Booker Prize. His most recent work of nonfiction is Italian Ways: On and Off the Rails from Milan to Palermo. His essays have appeared regularly in The New Yorker and The New York Review of Books, for which he blogs. He lives in Milan, Italy.
Loading...
or
Not Currently Available for Direct Purchase