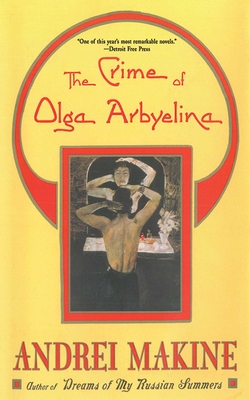 The Crime of Olga Arbyelina

The summer of ’47. In the sleepy town of Villiers-la-Forêt, roughly an hour from Paris, the peaceful radiance of the day is interrupted by the discovery that, along a nearby riverbank, the body of a man has washed up, a gaping wound in his skull. Beside him rests a beautiful, nearly bare-breasted woman, her dress soaked and in tatters. An accident or foul play? A crime of passion? Soon there are almost as many speculations and theories as there are townspeople. The woman, it turns out, is a Russian princess, Olga Arbyelina, a refugee from the Bolshevik revolution who in the 1930s had settled in town along with many of her compatriots. Rumor was that Olga's husband, a dashing prince given to gambling and revels, had deserted her some years after the couple's arrival in France, leaving her alone to care for their young son. About the victim, also a Russian refugee, little is known: many years Olga's elder, he was a taciturn, rather coarse, slightly ridiculous man name Sergei Golets, thought dismissively to be a former horse butcher. What on earth could have brought these two unlikely souls together?

Makine meticulously re-creates Olga's past—her enchanted childhood; her pampered youth and fevered, transitory embrace of the revolution; her arduous flight toward freedom; her encounter with the dashing White Army officer who saved her life; her marriage and arrival in France; the birth of her adored son. Love has its limits, its limitations and boundaries. But in a woman of great passion, what do such limits mean when you know that each day may be the last for your son?