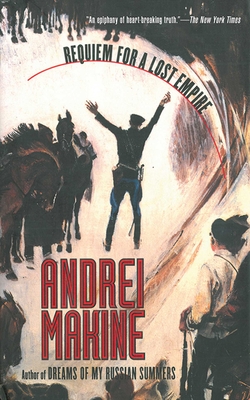 Requiem for a Lost Empire

In this remarkable novel, which spans eighty years of the twentieth century, Andreï Makine describes, beautifully but unsparingly, the almost uninterrupted succession of violence, misery, and horror that has been visited on the Russian people since the October Revolution of 1917. For those quick to forget, or too young to remember, he paints a graphic portrait of those years in a three-generational novel that is as moving as it is revealing.

A young Russian army doctor is sent to distant shores to bind the wounds of those in Africa, the Near East, and South America that are pawns in the global political chess game during the Cold War. Recruited by an intelligence agent, he experiences the bloody reality of revolution on the ground. The book casts its eye back toward his grandfather Nikolai, a Red cavalry soldier fighting the Whites in 1920, and his father, whose story of World War II is invoked with a passion and force that bear comparison to the best writing on the subject.

From the battlefields of the 1920s to the harsh African heat and dust of the desert in the 1980s, from the orphanage where the narrator spent his youth to the art galleries and chic salons of the glittering new West, Requiem for a Lost Empire has all the sweep and depth, all the beauty and insight of the great Russian novels. It is, as the eminent French critic Edmonde Charles-Roux noted, "an astonishing novel, one that will surely stand the test of time."

Andreï Makine is an internationally best-selling author. He is the winner of the Goncourt Prize and the Medicis Prize, the two highest literary awards in France, for his novel Dreams of My Russian Summers, which was also a New York Times Notable Book and a Los Angeles Times Best Book of the Year. Makine was born in Siberia in 1957 and raised in the Soviet Union. Granted asylum in France in 1987, Makine was personally given French citizenship by President Jacques Chirac. He now lives in Paris. Arcade Publishing has published ten of Makine’s acclaimed novels in English.
Loading...
or support indie stores by buying on
(This book is on backorder)