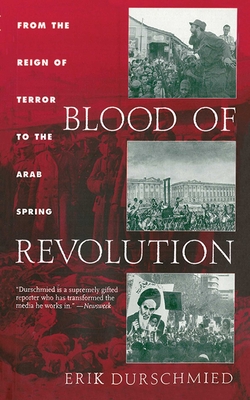 From the Reign of Terror to the Arab Spring

In this fascinating book, the author of The Hinge Factor and The Weather Factor surveys revolutions across the centuries, vividly portraying the people and events that brought wrenching, often enduring—and always bloody—change to countries and societies almost overnight. Durschmied begins with the French Revolution and goes on to examine the revolutions of Mexico in 1910, Russia in 1917, and Japan in 1945, as well as the failed putsch against Hitler in 1944. His account of the Cuban Revolution is peppered with personal anecdotes—for he was the first foreign correspondent to meet Castro when the future leader was still in the Sierra Maestra. He concludes with the Iranian Revolution that ousted the Shah in 1979—another that he personally covered—and, in a new preface, extends his analysis to the Arab Spring.

Each revolution, Durschmied contends, has its own dynamic and memorable cast of characters, but all too often the end result is the same: mayhem, betrayal, glory, and death. Unlike the American Revolution, which is the counterexample, few revolutions are spared the harsh reality that most devour their own children.

“Durschmied is a supremely gifted reporter who has transformed the media he works in.”
—Newsweek

“[A] light and lively narrative that serves as a useful introduction for the general reader.”
—Library Journal

Erik Durschmied was born in Vienna in 1930 and emigrated to Canada after World War II. A television war correspondent for the BBC and CBS, he has covered conflicts in Afghanistan, Belfast, Beirut, Chile, Cuba, Iran, Iraq, and Vietnam, and won numerous awards for his work. He lives in Paris and Provence with his family.
Loading...
or
Not Currently Available for Direct Purchase