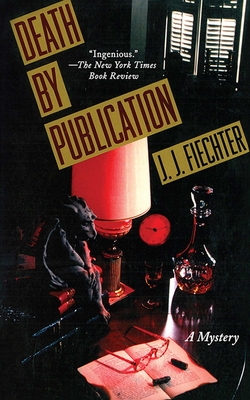 Sir Edward Destry, head of a distinguished publishing house in London, has been friends with his most successful author, the dashing French war hero Nicolas Fabry, for thirty years. Over time, though, Sir Edward’s admiration for his friend has soured into envy. When Fabry publishes a new novel in France that rockets to the top of the bestseller list and wins the country’s most prestigious literary prize, Sir Edward plunges into grief and fury. Fabry’s fiction is no fiction. Its heroine is modeled on the only woman Sir Edward ever loved—and for whose tragic suicide Destry took the blame. Now he discovers it was Fabry who was responsible for her death, and he abandons her. With precision and passion, Sir Edward plots his revenge. He translates Fabry’s novel into English and devises a plan guaranteed to cause disgrace, ruin, and—death by publication.

Darkly comic and masterfully plotted, Death by Publication, which won France’s most prestigious detective fiction award the year it was published, is an inspired exploration of obsession, betrayal, and fraud—a gripping page-turner that is as thought-provoking as it is stylish.

J. J. Fiechter was born to a Swiss family in Alexandria, Egypt, in 1927. He worked for many years as an historian, writing books on a wide range of subjects from the French Revolution to Egyptology. In 1994, he won France’s Grand Prize for Detective Fiction for Death by Publication, also published by Arcade.
Loading...
or
Not Currently Available for Direct Purchase