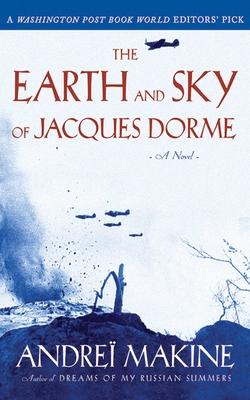 The Earth and Sky of Jacques Dorme

With this novel, Andreï Makine, whose work has been compared to that of Balzac, Chekhov, Pasternak, and Proust, brings to a stunning conclusion his epic trilogy that began with Dreams of My Russian Summers and continued with Requiem for a Lost Empire.

The novel opens in 1942, in a burning, gutted Stalingrad, where the German and Russian armies are locked in a struggle to the death. Amid these ruins, a French pilot and a nurse, also French, are engaged in a passionate affair that each knows will be hopelessly brief. The pilot, Jacques Dorme, was shot down two years earlier. Imprisoned and sent east to a German POW camp, Dorme made a daring escape and crossed Germany stealthily by night until he arrived in an already devastated Russia, where, having proved his mettle as a pilot, he joined a Russian squadron stationed near Stalingrad. But during the brief time they have together there, the love between Dorme and Alexandra builds and blossoms into a relationship they both know comes but once in a lifetime.

Several decades later, the narrator—a Russian exiled in France, a war orphan haunted by his dark childhood and obsessively searching for his roots—travels back to his native land, where in the icy and treacherous wastelands of Siberia he attempts to discover how his life and that of Jacques Dorme are inextricably intertwined.