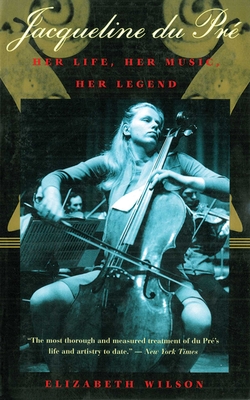 Her Life, Her Music, Her Legend

She was beautiful. She was a musical genius. She was married to another prodigious musician, the conductor and pianist Daniel Barenboim. Their fairy-tale marriage turned them into a royal musical couple. This definitive biography charts du Pré’s meteoric career from her early twenties, when she became a legend virtually overnight.

For over a decade Jacqueline du Pré performed the cello repertory with all the best symphonic orchestras around the world, and during those years she also recorded the entire cello literature. At the age of twenty-seven, however, Jackie was felled at the height of her career by multiple sclerosis. She died in 1987, leaving behind an extraordinary musical legacy.

Jackie’s unworldly nature and ability to communicate in her playing the full spectrum of human emotions hid a complex personality where dark doubts coexisted with the certainty of her talent. Wilson details Jackie’s passionate, tumultuous, complicated relationship with her sister Hilary, depicted in the film Hilary and Jackie. She also examines the origins and nature of Jackie’s extraordinary talent, assesses her lasting importance as an interpreter, and concludes her biography with a sensitive account of du Pré’s tragic physical decline, when, no longer able to play, Jacqueline struggled bravely against the ravages of her unforgiving illness. Du Pré’s glorious career and her valiant fight against hopeless odds bring additional inspiration to this edifying biography.