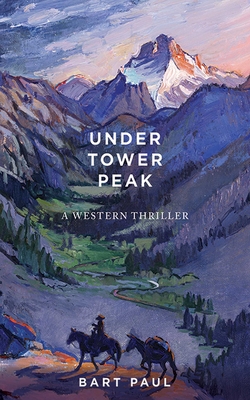 After two tours as a sniper in Iraq, Tommy Smith has returned to his former life as a cowboy and wilderness guide in California’s Sierra Nevada, hoping to reclaim the simplicity of his youth and heal the wounds the world can’t see. When, high on a mountain pass, he and his partner find the wrecked plane of a billionaire adventurer who disappeared months earlier, a seemingly innocent act triggers a breathtaking cycle of violence that threatens Tommy’s world. Soon he is enmeshed in the struggle between the billionaire’s trophy wife and wannabe drug lord son and their allies. Every effort to set things right draws him deeper into a bad situation and closer to needing those deadly skills that he had hoped to leave behind forever.

With lean, efficient prose and dialogue that crackles with repartee, Bart Paul has written a contemporary thriller of steadily mounting suspense and ruthless action. He captures both the beauty of the high mountain wilderness and the laconic rhythms of the outfitters’ lives. In Tommy Smith he offers a protagonist whose cool competence, home-grown decency, and clarity of purpose in the face of danger suggest a brotherhood with heroes from the likes of Ernest Hemingway and Cormac McCarthy.

Praise For Under Tower Peak: A Tommy Smith High Country Noir, Book One…

“A scenic, suspenseful debut novel turns out to be one of the best of the season. . . . Bart Paul’s debut novel displays some formidable influences—Hemingway, for instance . . . Shadows of Cormac McCarthy and Jim Harrison also flutter across the pages of this swift-moving tale. . . . The nonstop action in Under Tower Peak is well-paced, the plot twists surprising (even shocking), and the occasional humor welcome. . . . A must-read.” —Wall Street Journal

“A superb contemporary western thriller. Paul's Tommy Smith is right up there with James Lee Burke's Dave Robichaux. . . . Bart Paul knows his High Sierra country inside out. Under Tower Peak is a beautifully-written, searingly honest literary thriller by a first-rate storyteller and outdoorsman.”
—Howard Frank Mosher, author of Walking to Gatlinburg

“A superior blend of thriller and contemporary western, full of gun lore and with a fine appreciation of the Sierra Nevada wilderness. And Paul’s spare, reflective style recalls Hemingway.” —Booklist, starred review

Bart Paul is the author of TV documentaries, short stories, the biography Double-Edged Sword: The Many Lives of Hemingway’s Friend, the American Matador Sidney Franklin, and the novels in his Tommy Smith High Country Noir series, including Under Tower Peak, Cheatgrass, and See That My Grave Is Kept Clean..Throughout his school years, he spent summers working on cattle ranches and pack outfits in California’s Eastern Sierra. After living in Southern California for many years, he now divides his time between Bridgeport, California, near Yosemite, and Smith Valley, Nevada—the ranching country of his novels.
or support indie stores by buying on
(This book is on backorder)