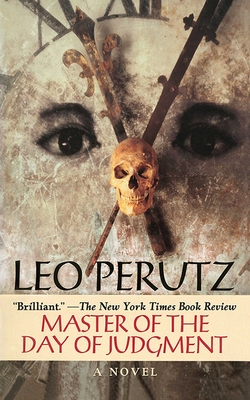 Master of the Day of Judgment

Vienna, 1909. When the celebrated actor Eugen Bischoff is found dead in his garden pavilion, suspicion falls immediately on Baron von Yosch, a well-to-do army officer who was once the lover of the dead man’s wife. By all appearances—the door was locked from the inside when the two shots rang out—the actor took his own life, but someone, or something, drove him to it. The baron sets out to learn all he can about the actor’s death in order to clear his name. Meanwhile, within a few days, similar apparent suicides are reported. What started out as a straightforward quest to establish Bischoff’s last deeds and discover the truth of his death becomes a search through the ages for an invisible enemy identified only by the actor’s dying breath, when he whispered: “. . . the Day of Judgment.” Leo Perutz combines his hallmark blend of suspense and the fantastic in this spine-tingling mystery.

Leo Perutz, a contemporary of Franz Kafka, was born in Prague in 1882 and lived in Vienna until the Nazi Anschluss, when he fled to Palestine. He returned from Israel to Austria in the early fifties and died there in 1957. Now recognized as a twentieth-century master, he is the author of eleven novels that blend varying degrees of history, legend, suspense, and the fantastic.
or
Not Currently Available for Direct Purchase