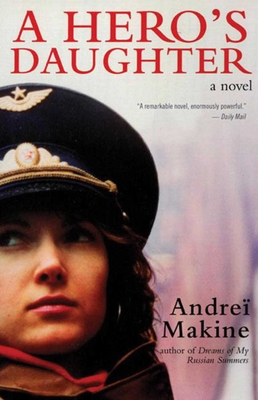 Set in the Soviet Union from World War II until the early 1990s, A Hero's Daughter portrays the rise and decline of the Soviet Union through the story of Ivan Dimitrovich Davidov and his family. For his extraordinary bravery and courage beyond the call of duty at the Battle of Stalingrad, Ivan is awarded his country's highest military honor: Hero of the Soviet Union. Married after the war to Tatyana, the medical orderly who found him barely breathing amid a pile of corpses after another apocalyptic battle late in the war, they have a daughter, Olya, who grows up in the glow of her father's reputation.

In 1980, the beautiful Olya, now seventeen, assigned as an interpreter during the 1980 Moscow Olympic Games, commits and indiscretion with a French athlete, and throws her straight into the waiting arms of the KGB. As the years roll by, Olya, more and more deeply implicated in espionage, despairs at her fates as a "political prostitute," while her father, equally used by the State, becomes increasingly disillusioned and unruly, until he is arrested for drunken and disorderly conduct. Finally the lives of father and daughter intersect in an utterly moving and heartrending conclusion.

Praise For A Hero's Daughter…

"Nobody surpasses Makine as a maker of stunning visuals...He may really be his generation's Chekhov and Proust."- Kirkus Reviews, starred review

"It carries the unmistakable stamp of historical and human truth. ...Subtle and powerful." - Sunday Telegraph

"Nobody surpasses Makine as a maker of stunning visuals...He may really be his generation's Chekhov and Proust."- Kirkus Reviews, starred review

"It carries the unmistakable stamp of historical and human truth. ...Subtle and powerful." - Sunday Telegraph