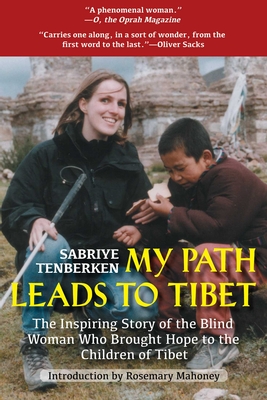 My Path Leads to Tibet (Paperback)

While studying Chinese and Asian civilizations in college, Sabriye Tenberken was stunned to learn that in Tibet blind children were living in appalling conditions—shunned by society, abandoned, and left to their own devices. Sabriye, who had lost her sight at the age of twelve as the result of a retinal disease, promised herself early on that she would never allow her blindness to turn her into an invalid. When she heard of a place where sightlessness was practically akin to leprosy, the decision was instant: she would go to Tibet to help these children.Armed with nothing but her conviction and determination, she single-handedly devised a Tibetan Braille alphabet and opened the first school for the blind in Tibet, with only a handful of students. From its modest beginnings, that school has grown into a full-fledged institution for visually impaired people of all ages. In this updated edition of My Path Leads to Tibet, Sabriye, shares the inspiring story of how she shone an unlikely light in a dark place.

Sabriye Tenberken developed a strong interest in creating ethical and social change. She studied Tibetology and Central Asian sciences at Bonn University, Germany. She and her partner, Paul Kronenberg, are the founders of Braille Without Borders, a group that provides counsel and services for the blind worldwide. In 2005 Sabriye and Paul founded kanthari, the International Institute for Social Entrepreneurs, in Kerala, southern India. Kanthari fosters participants from all over the world who, like Sabriye, have both a passion to make the world a better place and the strength to be forces of good rather than the victims of circumstance. A motivational speaker who also starred in the award-winning documentary Blindsight, she was a guest on many talk shows, including Oprah. Among her many international awards are Time Magazine’s Hero award (for both Asia and Europe), the Mother Teresa Award, and the Young Global Leader (WEF). She was also nominated for the Nobel Peace Prize. Sabriye and Paul live in Kerala, India.

Rosemary Mahoney is the author of For the Benefit of Those Who See: Dispatches from the World of the Blind (January 2014). She is also the author of Whoredom in Kimmage, a National Book Critics Circle Award finalist; Down the Nile: Alone in a Fisherman’s Skiff; a New York Times Notable Book, A Likely Story: One Summer with Lillian Hellman; and two other books. She was a 2011 Guggenheim fellow and is the recipient of a Whiting Writers’ Award.

Praise For My Path Leads to Tibet: The Inspiring Story of the Blind Woman Who Brought Hope to the Children of Tibet…

"Carries one along, in a sort of wonder, from the first word to the last." —Oliver Sacks

"Genuinely inspiring . . . Tenberken demonstrates a nuanced understanding of her role as a Westerner in Tibet." —Washington Post Book World

"Carries one along, in a sort of wonder, from the first word to the last." —Oliver Sacks

"Genuinely inspiring . . . Tenberken demonstrates a nuanced understanding of her role as a Westerner in Tibet." —Washington Post Book World