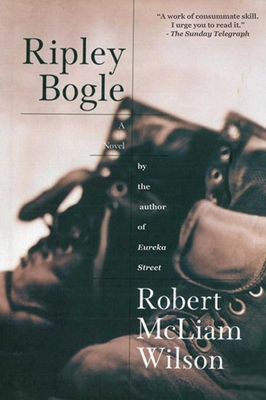 Ripley Bogle, one of the most memorable Irish characters since Leopold Bloom roamed Dublin, is a self-proclaimed bum, an excoriating and expectorating Irish expatriate from Belfast, and a Cambridge dropout. Penniless but unbowed, he wanders the streets of London, treating the reader to the ruminations of his teeming, romping imagination. Here lies the mystery and wonder of this book: How could anyone of Bogle’s prodigious intelligence and powers of perception end up in vagabondage?

Winner of the Irish Book Award, Ripley Bogle spreads before us a fabulous beggar’s banquet: a running commentary of bawdy brilliance and dyspeptic hilarity. No cow is too sacred for Bogle. After acquainting us with his birth and family (“the usual cast from subhuman Gaelic scumbuckets”), he relives his past (“the bathetic dribble of error and reparation”), describes his first experiences with love (“the silken clock that backs the witless levitation of the penis”), and analyzes his Irishness (“crap promoted by Americans and professors of English literature”). Though he gnaws at the fringes of society, Bogle’s keen mind can skewer its fat heart.

Chain-smoking his way around London, young Bogle looks to stitch together the pieces of his ragged life—to forgive himself his sins and to find a place of warmth within his own dark thoughts.

Praise For Ripley Bogle: A Novel…

"A masterful monologue of despair, as bitter as it is brilliant."—Washington Post

"A masterful monologue of despair, as bitter as it is brilliant."—Washington Post

Robert McLiam Wilson was born in Belfast, Northern Ireland in 1966. He studied English at Cambridge University, but dropped out to write Ripley Bogle. His works has won numerous awards, including the Rooney Prize and the Hughes Prize. In 2003, Wilson was named as one of the “Best Young British Novelists” by Granta.
Loading...
or
Not Currently Available for Direct Purchase