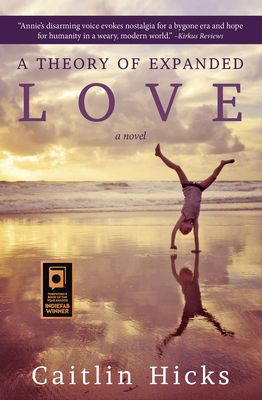 A Theory of Expanded Love

Trapped in her enormous, devout Catholic family in 1963, Annie creates a hilarious campaign of lies when the pope dies and their family friend, Cardinal Stefanucci, is unexpectedly on the short list to be elected the first American pope.  Driven to elevate her family to the holiest of holy rollers in the parish, Annie is tortured by her own dishonesty. But when “The Hands” visit her in her bed and when her sister finds herself facing a scandal, Annie discovers her parents will do almost anything to uphold their reputation and keep their secrets safe.  Questioning all she has believed and torn between her own gut instinct and years of Catholic guilt, Annie takes courageous risks to wrest salvation from the tragic sequence of events set in motion by her parents’ betrayal.


Praise For A Theory of Expanded Love…

"Annie's disarming voice evokes nostalgia for a bygone era and hope for humanity in a weary, modern world."  –Kirkus Reviews


"This worthy debut has a disarming humor."  –Publisher's Weekly


". . . enough charm to fill the corridors of Vatican City twice over."  –Foreword Reviews


“In a nutshell: I love the story. The voice is fantastic. I thoroughly enjoyed this and had a lot of fun reading it over, three times!  As a Catholic who grew up in the 60′s and 70′s this spoke to me on many levels and I laughed right out loud on more than one occasion. It was a joy."  –Erin Niumata, VP, Folio Lit

Caitlin Hicks is an author, international playwright, and acclaimed performer in British Columbia, Canada. Monologues from several of her plays were featured in Smith & Kraus’ series Best Women’s Stage Monologues (New York). She also wrote the play, later adapted for the screen, Singing the Bones, which debuted at the Montreal World Film Festival to stellar reviews and has screened around the world. While A Theory of Expanded Love is her debut novel, she has published several short stories, including That Rescue Feeling, which was shortlisted for the John Spencer Hill Fiction Award. She worked as a writer for CBS and NBC radio and has performed her fiction and non-fiction for CBC national radio. In print, her writing has been published in The San Francisco Chronicle, The Vancouver Sun, The Milwaukee Journal-Sentinel, Fiddlehead Magazine, Knight Literary Journal and other publications. Hicks was raised in a large, Catholic family in Pasadena, California.
Loading...
or
Not Currently Available for Direct Purchase