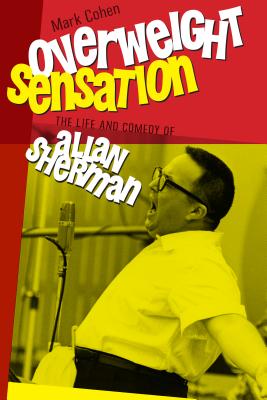 The Life and Comedy of Allan Sherman (Brandeis Series in American Jewish History, Culture, and Life)

Allan Sherman was the Larry David, the Adam Sandler, the Sacha Baron Cohen of 1963. He led Jewish humor and sensibilities out of ethnic enclaves and into the American mainstream with explosively funny parodies of classic songs that won Sherman extraordinary success and acclaim across the board, from Harpo Marx to President Kennedy. In Overweight Sensation, Mark Cohen argues persuasively for Sherman’s legacy as a touchstone of postwar humor and a turning point in Jewish American cultural history. With exclusive access to Allan Sherman’s estate, Cohen has written the first biography of the manic, bacchanalian, and hugely creative artist who sold three million albums in just twelve months, yet died in obscurity a decade later at the age of forty-nine. Comprehensive, dramatic, stylish, and tragic, Overweight Sensation is destined to become the definitive Sherman biography.

MARK COHEN is a writer, editor, and journalist specializing in American Jewish culture. His previous books include Missing a Beat: The Rants and Regrets of Seymour Krim, and Last Century of a Sephardic Community. He lives in the San Francisco Bay Area.
Loading...
or
Not Currently Available for Direct Purchase