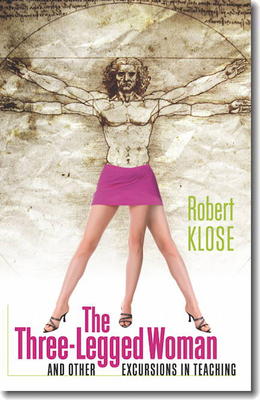 The Three-Legged Woman and Other Excursions in Teaching (Paperback)

Since 1986, Robert Klose has taught biology at a “small, impoverished, careworn” college in central Maine. Located on a former military base, the school became first the South Campus of the University of Maine, or SCUM, and later, Penobscot Valley Community College, then Bangor Community College, and most recently University College of Bangor. Despite its improved nomenclature, University College of Bangor remains an open-admissions environment at which “one never knows what’s going to come in over the transom.” Klose’s nontraditional students have included, in addition to single parents and veterans, the homeless, the abused, ex-cons, and even a murderer (who was otherwise “a very nice person”). Chronicling his experiences teaching these diverse students, Klose describes with equal doses of care and wry wit those who are profoundly unfit for college, their often inadequate command of the lingua franca, and the alacrity with which they seize upon the paranormal (the three-legged woman) while expressing skepticism about mainstream science. He reflects on the decline of reading for enjoyment and the folly of regarding email as a praiseworthy substitute for expository writing. He details what works in the classroom, identifies what has failed, and relates stories of the absurd, the sublime, and the unanticipated, such as one student’s outburst following a discussion of evolution: “For what you have taught today you shall be damned to everlasting fires of hell!” Tempering thoughtfulness with a light touch and plenty of humor, these essays prove that teaching, an “imperfect occupation,” remains a “special profession.”

ROBERT KLOSE teaches biology at University College of Bangor, Maine. He is the author of Adopting Alyosha: A Single Man Finds a Son in Russia and Small Worlds: Adopted Sons, Pet Piranhas, and Other Mortal Concerns.
or
Not Currently Available for Direct Purchase
Copyright © 2020 American Booksellers Association