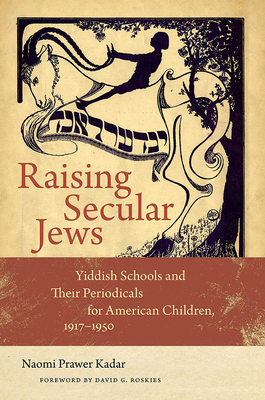 This unique literary study of Yiddish children’s periodicals casts new light on secular Yiddish schools in America in the first half of the twentieth century. Rejecting the traditional religious education of the Talmud Torahs and congregational schools, these Yiddish schools chose Yiddish itself as the primary conduit of Jewish identity and culture. Four Yiddish school networks emerged, which despite their political and ideological differences were all committed to propagating the Yiddish language, supporting social justice, and preparing their students for participation in both Jewish and American culture. Focusing on the Yiddish children’s periodicals produced by the Labor Zionist Farband, the secular Sholem Aleichem schools, the socialist Workmen’s Circle, and the Ordn schools of the Communist-aligned International Workers Order, Naomi Kadar shows how secular immigrant Jews sought to pass on their identity and values as they prepared their youth to become full-fledged Americans.

NAOMI PRAWER KADAR (1949–2010), an inspiring educational innovator, had an enduring impact on the teaching of Yiddish language and literature through her active leadership in the field. She served as national director of the Workmen’s Circle schools and coordinated popular programs on Yiddish culture. She earned her PhD in Yiddish literature at Columbia University and taught at numerous institutions, including Tel Aviv University, the Jewish Theological Seminary, and the YIVO Institute. She was also the creator of BrainPOP ESL, an animated online program for teaching children English as a second language. The Naomi Foundation, established after her death, supports the teaching of Yiddish in academic programs.
or
Not Currently Available for Direct Purchase
Copyright © 2020 American Booksellers Association