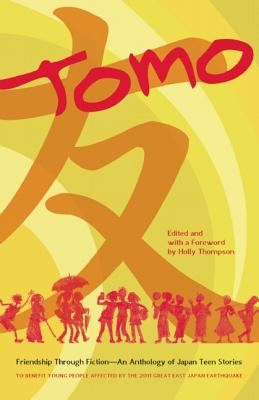 Friendship Through Fiction: An Anthology of Japan Teen Stories

"A broadly appealing mix of the tragic and droll, comforting, disturbing, exotic and universal" - "Kirkus Reviews"
"Offers a unique and wide-ranging taste of Japanese life" - "Booklist"
"The collection is extremely varied, featuring urban and rural settings, contemporary situations and timeless folk tales, humor, and adventure... Numerous stories involve mixed-race parents and children, affording good insights into cultural assimilation. Tomo is an excellent story collection, presenting a rich and varied immersion in Japanese culture from a teen perspective." - "VOYA"
"Published on the one-year anniversary of the Japanese tsunami and earthquake, this collection of short stories and poems about Japanese teens is weird and wonderful, studded with the unique color of Japanese teen pop culture, as well as the impact of defining events from the twenty-first century to the present: Pearl Harbor, Hiroshima, the tsunami, earthquake and nuclear disaster." - "Barnes & Noble Review"
"Thirty-six stories by writers somehow connected to Japan, five contributors with ties to Tohoku each piece concisely aligns the disparate puzzle of the teenage map..."Tomo" reverberates with the authentic voice of Japanese and bicultural teens as they face down the confusing adult world before and after 3/11." - "The Japan Times"
"From Pasmo travel cards to Harajuku girls to face-offs between a Kendo club and a dance group at the school gym, Japan is placed vividly in the reader's heart and mind. And that heart would have to be made of the proverbial stone not to feel for the people affected by the earthquake. But "Tomo" inspires more than sympathyit ignites us to empathy." - "The Asian Review of Books"
"The thirty-six stories of "Tomo: Friendship Through FictionAn Anthology of Japan Teen Stories" cover a wide range of genres (prose, verse, graphic narratives) and feature nine stories translated from the Japanese...most of the authors, many of whom write for adults, will be new to American teens." - "The Horn Book"
This aptly named fiction anthology"tomo" means friend in Japaneseis a true labor of friendship to benefit teens in Japan whose lives were upended by the violent earthquake and tsunami of March 11, 2011. Authors from Japan and around the world have contributed works of fiction set in or related to Japan. Young adult English-language readers will be able to connect with their Japanese counterparts through stories of contemporary Japanese teens, ninja and "yokai" teens, folklore teens, mixed-heritage teens, and non-Japanese teens who call Japan home. Tales of friendship, mystery, love, ghosts, magic, science fiction, and history will propel readers to Japan past and present and to Japanese universes abroad.
Portions of the proceeds of "Tomo" will be donated to the Japanese non-profit, HOPE FOR TOMORROW, to support ongoing relief efforts for teens in Japan.
Edited and with a foreword by Holly Thompson, "Tomo" contributing authors include Naoko Awa, Deni Bechard, Jennifer Fumiko Cahill, Liza Dalby, Megumi Fujino, Andrew Fukuda, Alan Gratz, Katrina Toshiko Grigg-Saito, Suzanne Kamata, Sachiko Kashiwaba, Kelly Luce, Shogo Oketani and Leza Lowitz, Ryusuke Saito, Graham Salisbury, Fumio Takano, and Wendy Tokunaga, among others.
Holly Thompson is a longtime writing teacher and resident of Japan and author of the young adult verse novel "Orchards," which won the 2012 Asian/Pacific American Librarians Association Award for Young Adult Literature . She serves as the regional advisor for the Tokyo chapter of the Society of Children's Book Writers and Illustrators.


Praise For Tomo: Friendship Through Fiction: An Anthology of Japan Teen Stories…

"These stories truly surprised me with their depth, literary quality, and heart. I loved them all!" - Debbi Michiko Florence, author of Japan: A Kaleidoscope Kids Book

"As the winds blow through the tales and understanding blossoms in the lives of teenage protagonists, a real live vision of hope, peace and renewal is formed which brings a full circle to the meaning of 'Friend'...In this ripe time for healing just before the one year anniversary of 3/11/2011, make a new friend - the book called Tomo." - Japan Visitor

"There is plenty for adults to enjoy here, too." - JQ Magazine

Holly Thompson (www.hatbooks.com) is a longtime resident of Japan and author of the young adult verse novel "Orchards" (Delacorte/Random House, 2011), which was nominated for a 2012 YALSA/ALA Best Fiction for Young Adults award. She is also the author of the picture book "The Wakame Gatherers" (Shen s Books, 2007) and the novel "Ash" (Stone Bridge Press, 2001). She is a regular contributor to the Double Take column of All Nippon Airway s "Wingspan" magazine, and serves as Regional Advisor for the Tokyo chapter of the Society of Children's Book Writers and Illustrators. She has taught creative and academic writing at Yokohama City University for many years and often gives presentations on writing craft. Visit her Hatbooks blog (http: //hatbooks.blogspot.com) on writing, teaching, living and learning, mostly in Japan."
Loading...
or
Not Currently Available for Direct Purchase