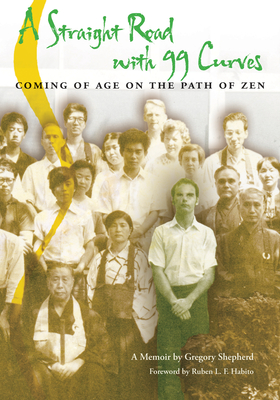 A Straight Road with 99 Curves (Paperback)

Coming of Age on the Path of Zen

"Deeply involving, instructive, and capable of touching any reader who cares about the search for meaning."--Mitch Horowitz, author of Occult America

"In being so frank about his own struggles and fantasies, Greg's personal tale becomes something more universal."--David R. Loy, author of Money, Sex, War, Karma: Notes for a Buddhist Revolution

In 1971, when Greg Shepherd was in his early twenties, he left New Jersey and joined the Koko An Zendo community in Hawaii. What began as a quest for enlightenment became Greg's confrontation with his own inner demons: his need for approval, his distrust of authority, and his ego-driven fixation on achieving the profound spiritual breakthrough of kensho ("the Big K"). Later, in Japan, he struggled with prejudice and cultural rigidity and found his deeper meditations leading to actual panic attacks over fear of losing himself. Ultimately, he broke with Zen and his teachers to pursue a career in music.

This frank memoir traces Greg Shepherd's meandering path from seeker to disillusionment, and, over a decade later, his way back to Zen and inner peace. We experience Zen practice in Japan and Hawaii and meet Zen masters Yamada Koun Roshi and Robert Aitken, the "dean of American Buddhism" (who had once pegged Greg as his successor). And we understand why Zen was so appealing to the American counterculture and how its profound lessons of focus and detachment remain insightful and important.

Gregory Shepherd has studied Zen since the early 1970s in Hawaii and Japan. He is associate professor of music at Kauai Community College.

Gregory Shepherd: Gregory Shepherd has studied Zen Buddhism since the early 1970s. He practiced with Yamada Koun Roshi at San Un Zendo in Kamakura and also with Robert Aitken Roshi in Honolulu, where he was groomed to be Aitken's first successor. Shepherd later received a fellowship from Japanese Ministry of Education to research contemporary Japanese music. He is currently Associate Professor of music at Kauai Community College. Ruben L.F. Habito (born c. 1947) was born in the Philippines and is a former Jesuit priest turned master practicing in the Sanbo Kyodan lineage of Zen. In his early youth he was sent to Japan on missionary work where he began Zen practice under Yamada Koun-roshi. In 1988, Ruben received Dharma transmission from Yamada Koun. Ruben left the Jesuit order in 1989, and in 1991 founded the lay organization Maria Kannon Zen Center in Dallas, Texas. He has taught at Perkins School of Theology, Southern Methodist University since 1989 where he continues to be a faculty member
or
Not Currently Available for Direct Purchase
Copyright © 2020 American Booksellers Association