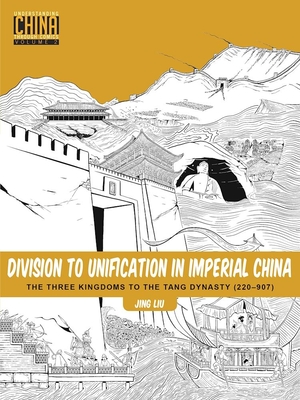 Division to Unification in Imperial China

Who founded China? Are Chinese people religious? What is Chinese culture and how has it changed over time? The Understanding China Through Comics series answers these questions and more.

Division to Unification in Imperial China is series volume two. It explores one of China's more chaotic periods when Chinese culture flourished while civil wars and foreign invasions repeatedly thwarted attempts at unification.

A handy timeline is included.

Jing Liu is a Beijing native now living in Davis, California. A successful designer and entrepreneur who helped brands tell their stories, Jing currently uses his artistry to tell the story of China.

Jing Liu is an artist and entrepreneur from Beijing, China. He is currently the Managing Director of Moli Design, a China-based design firm that counts the BBC, MasterCard, The Ford Foundation, PriceWaterhouseCoopers, and UNICEF among its many clients. Liu graduated from Beijing University of Technology with undergraduate degrees in industrial design and engineering, and a masters in international economics and trade. Division to Unification in Imperial China is his second book.
Loading...
or support indie stores by buying on