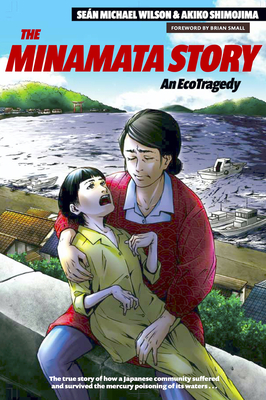 A powerful graphic novel /manga that tells the story of Minamata disease, a debilitating and sometimes fatal condition caused by the Chisso chemical factory's careless release of methylmercury into the waters of the coastal community of Minamata in southern Japan. First identified in 1956, it became a hot topic in Japan in the 1970s and 80s, growing into an iconic struggle between people versus corporations and government agencies. This struggle is relevant today, not simply because many people are still living with the disease but also because, in this time of growing concern over the safety of our environment--viz. Flint, Michigan--Minamata gives us as a very moving example of such human-caused environmental disasters and what we can do about them.

Sean Michael Wilson is a comic book writer from Scotland. He has had more than 30 books published with a variety of US, UK and Japanese publishers. Working with various Japanese artists he has written a unique line of Japanese history/martial arts books, including The Book of Five Rings, Yakuza Moon and Black Ships. In 2016 his book The Faceless Ghost was nominated for the prestigious Eisner Book Awards and received a medal in the 2016 'Independent Publisher Book Awards'. In 2017, his book Secrets of the Ninja won an International Manga Award from the Japanese government - he is the first British person to receive this award. Akiko Shimojima is a comic artist from Japan. Her career began when she was in a university in NY. Her comics have been published by several companies in Japan and other countries. She has been working with Sean Michael Wilson, on various projects, including The 47 Ronin, Bushido, and the Satsuma Rebellion. Her book Cold Mountain was the winner of the China Comic and Animation Competition 2015 'Best Overseas Comic' award. She also teaches how to draw digital comics at a college in Tokyo. Brian Small is an environmental activist and teacher at Minami Kyushu University.
Loading...
or support indie stores by buying on