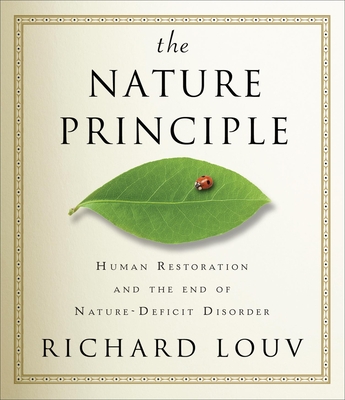 The Nature Principle presents a compelling case that a conscious reconnection to nature can make us whole again and that the future will belong to nature-smart individuals, families, businesses, and communities. Supported by evidence from emerging empirical and theoretical research and eye-opening anecdotes, Louv shows that when we tap into the restorative powers of the natural world we can boost mental acuity and creativity, heal illness, increase immunity, broaden our compassion, and strengthen human bonds. As he says in his introduction, The Nature Principle is “about the power of living in nature—not with it, but in it. The twenty-first century will be the century of human restoration in the natural world.”

Praise For The Nature Principle…

“May be just what our high-tech, urban culture needs to bring us down to earth.”
—Publishers Weekly

“Rick Adamson’s narration is smooth and vivid and lends life to this account of how humans can re-connect with the power of nature to strengthen their bonds and abilities.”
—The Bookwatch

“Inspiring call to better our lives by celebrating and protecting the living world. . . . Forward-looking teens will be inspired by this upbeat and broadly informative book about how to benefit from and sustain nature.”
—Booklist [HC starred review]

RICK ADAMSON's voiceover credits include industrials and commercials for radio, television, and audiobook recordings, including The Secret and Younger Next Year.